Enjoy Beautiful Butterflies in Our Own Backyards All photos by Doug Taron

Doug Taron, chief curator of the Chicago Academy of Sciences, says he wouldn’t want to imagine a world without butterflies because they are so beautiful, but butterflies also play an important role in the food chain. “They provide important nutrients to the ecosystem,” says Taron, who founded the Illinois Butterfly Monitoring Network in 1987. Today, volunteers monitor butterfly populations at more than 150 natural sites in the state.

More than 30 years of data is showing butterfly numbers in general are declining in the region covered by the network. That means fewer caterpillars and less food for other native animals. Predators of butterflies at the adult, caterpillar (larva) and egg stage include birds, frogs, dragonflies and snakes. Caterpillars are an important food source for adult birds to feed their young in summer. 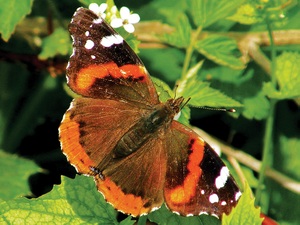 “Adults are the most noticeable part of the butterfly life cycle, but only account for a small part of the insect’s life span,” Taron says. Adult males and females fly, feed and mate. The female lays eggs on a host plant which will be eaten by caterpillars after the eggs hatch.

Some butterfly species require specific plants for caterpillars to get nourishment. “Most people know monarch caterpillars will only eat milkweeds,” Taron says. The monarch egg is about half the size of a sesame seed; a few weeks after it hatches, the caterpillar is already one inch long. When fully grown, it hardens into a chrysalis, or cocoon, and eventually emerge as a winged adult, ready to fly and mate. Adult butterflies do pollinate plants, although Taron says bees are much better pollinators.

The most common butterflies that can be found in yards and even the city have generalized tastes during the caterpillar stage. 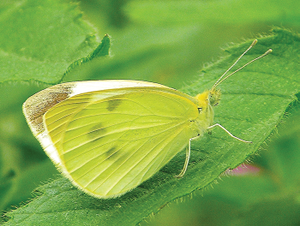 The cabbage white, which is not native, eats leaves of broccoli, cabbage and kale. A vegetable gardener likely will see cabbage whites in the yard.

One of the most common native butterflies in the Chicago region is the red admiral, with a striking black, white and orange wing pattern. Its caterpillar eats plants in the nettle family, including stinging nettles, which Taron notes proliferate along a Fox River trail near his Elgin home. “You see red admirals there all the time in summer,” he says.

Taron says red admirals seen in the Loop are likely eating an inconspicuous member of the nettle family called pellitory. Adults sip the nectar, while caterpillars munch on the plants. Red admiral adults also sip on nectar of tree sap and even bird droppings, as well as native asters and goldenrod.

Another common butterfly species seen in yards in summer is the black swallowtail. Its black wings are marked with yellow, blue, orange and red. The caterpillars feed on members of the carrot family, including non-native Queen Anne’s lace, which was brought to the U.S. from Europe, and the Midwest native golden Alexander, which grows in prairies and sunny suburban gardens. They also lay eggs on the leaves of carrots, parsley and dill.

Tiger swallowtails are also fairly common in neighborhoods where their host plants of ash, poplar and back cherry trees grow. The male tiger swallowtail is yellow with black “tiger stripes” on the front wings.

Another common yard species is the painted lady, with buff-colored upper wings and black tips marked with white spots on the front wings. Painted ladies have been known to lay eggs on up to 100 species of plants. The caterpillars especially like thistles, and adults sip nectar from thistles, as well as blazing star and ironweed, two native prairie plants. Painted ladies travel long distances migrating from warmer climes when spring arrives. This butterfly’s travels are not the same as the monarchs’, which involve an annual two-way migration to specific wintering grounds. 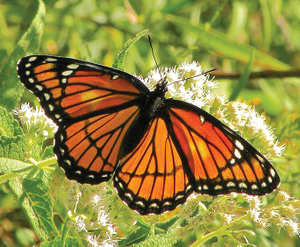 Sometimes the monarch is confused with the almost identical viceroy, which prefers wetter habitats and feeds as a caterpillar on willow, aspen and cottonwood trees. This butterfly has a black line across its wings that the monarch does not. It’s called a “mimic butterfly” because birds don’t like the taste of adult monarchs, and when they see a viceroy, they avoid eating it.

Monarch numbers have been declining overall, according to Emma Pelton, a conservation biologist for the Xerces Society for Invertebrate Conservation, but based on the observations of the Illinois Butterfly Monitoring Network, they seem to be stable in our state, Taron says. The Society studies the eastern populations that winter in California and the western populations that winter in Mexico.

Since the 1990s, numbers of monarchs in the eastern population have declined 70 to 80 percent, Pelton says, and western populations are doing even worse. The Monarch Joint Venture Integrated Monarch Monitoring Program, gathers data from not only high-quality sites, but also including agricultural lands, to get a broader picture of the insect’s population.

Reasons for the decline include pesticide use, habitat loss and climate change, according to the Xerces Society, which is one of the groups that petitioned the U.S. Fish and Wildlife Service to give the monarch protection under the Endangered Species Act. Citizen scientists have begun hand-rearing monarchs hoping to save them, but Taron and Pelton say that can be harmful in some cases. “When raising indoors, you’re making them more prone to disease,” Taron explains. “There have been studies showing that monarchs reared indoors are less fit than those that grew up naturally.” 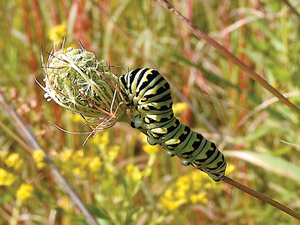 Pelton agrees. “Rearing is not a conservation strategy; it’s more of a personal, educational aspect,” she says. “We highly discourage people buying monarchs that are commercially reared.” The Xerces Society does advocate growing milkweed to help the monarchs. “But make sure you source them from growers who don’t use insecticides,” Pelton says. “The milkweed you buy at a big box store could have damaging level of pesticides.”

Avoiding pesticides in general helps butterflies. “Be tolerant of a lawn that has things other than just grass growing in it,” says Taron. The violets growing in his lawn attract great spangled fritillaries. He suggests planting nectar sources for butterflies. “Some great nectar sources include purple coneflower, black-eyed Susan, New England aster and blazing star. These species are all native and good nectar producers and they bloom at different times of the year.” He notes that butterfly houses don’t offer much to the insects. 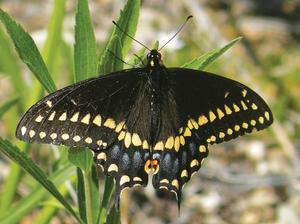 Taron also works with state-threatened and endangered butterfly species that require specific habitats which are rare in the region. For example, he raises Baltimore checkerspot caterpillars and releases them into restored ecosystems that can provide what the butterflies need.

Pelton agrees that carefully planned and organized captive breeding programs for rare butterflies can be an important tool in conserving them. “But that is not the current situation with the monarchs,” she says. “Monarchs don’t need our help growing up; we can help the most by making sure there’s sufficient habitat for them.” 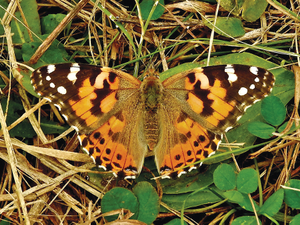 Learn to identify common butterflies and ways to attract them to yards with these resources.