Tyler Bechtold, foreman, Wright Tree Service, inspects the path where he will set up a pulley-system to safely lower the tree limb containing the honeybee hive. Photo: Ameren Ilinois

The Wright TreeService dispatched a crew to the 1100 block of Wise Street, in Alton, Illinois, in June, to safely remove limbs precariously hanging over power lines when the crew noticed honeybees flying into an opening in a limb needing to be removed. What was supposed to be a routine job turned into much more.

"We called Wright Tree Service to remove limbs from what Ameren Illinois considered a hazard tree to the electric grid in Alton," says David Schenck, vegetation supervisor at Ameren Illinois. "One of the limbs, about 50 feet up in the air, had a beehive inside of it. We knew that the proper ecological thing to do was to call a beekeeper, who shared with us the proper way to safely remove the limb to preserve the hive."

Once surrounding vegetation was safely removed and tree trimmers had a clear path to the honeybee-infested limb, a cotton T-shirt was placed into the entrance of the hive so the bees would not swarm the journeyman. They used a chainsaw to cut away the limb and a pulley-system to lower the log safely to the ground.

"We took extra safety precautions to make sure we didn't disturb the bees, because they are very active this time of the year," says Chris Lorenz, a safety supervisor with Wright Tree Service. "We used some advanced rigging to be able to safely lower the log that the honeybees were in without disturbing them." 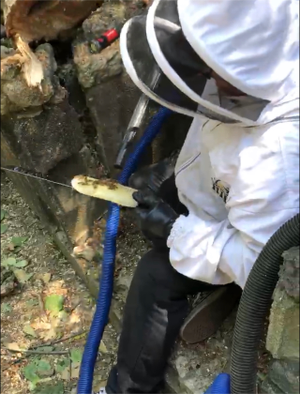 The removal process took about 90 minutes. Local beekeeper Johnny Murdock arrived later to gather the hive with a piece of equipment he personally made to remove honeybees. Murdock relocated the hive into a honeybee box at his home. "I have a special vacuum I created that is gentle and doesn't hurt them," says Murdock, a member of the St. Clair Beekeepers Association. "Once I had 90 percent of the bees out of the log, we split the limb in half so I could get to the honeycomb and remove the rest of the bees. I wanted to preserve the honeycomb because it has larvae and the queen laying eggs. I will hang the honey comb secured with rubber bands in the bee box and the honeybees will reattach the honeycombs to the frame. I will do everything I can to make sure it becomes a strong and healthy colony."