Composting is nature's version of recycling. It returns nutrients and water back to the soil and prevents greenhouse gas emissions, helping to fight climate change. Make the Pumpkin Smash on November 7 a fun, post-Halloween tradition. This event is held outdoors and masks are required. Plain, clean pumpkins of any size will be accepted, as well as those decorated with acrylic paint. Additions such as candles, yarn and stickers should be removed prior to drop-off.

Participants learn the importance of ensuring that they only compost biodegradable materials. Hosts and volunteers ask attendees to inspect pumpkins for contaminants before they go in the bin. “It’s important for the success of food scrap composting programs, which are expanding across the country, that residents know what they can and cannot put in their compost bin,” says Carrie Horak, Pumpkin Smash manager. 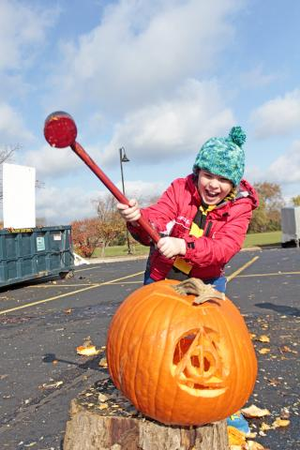 More than 1 billion pounds of pumpkins are grown in the U.S. each year. The majority end up in landfills. It’s not just a waste of food: In a landfill, pumpkins decompose and release methane, a greenhouse gas emission at least 23 times more powerful than carbon dioxide.

Besides the environmental benefits, the Pumpkin Smash is fun. Smashing pumpkins is not only allowed, it’s encouraged. “By smashing your pumpkin, you’re kickstarting the composting process and helping ensure we have enough space in the bin for all the pumpkins we collect,” says Horak. “People of all ages have a lot of fun with it.