During the fall season, nature lovers can enjoy two different types of turkeys. One is a bird, the wild turkey—the other is a mushroom, turkey tail fungus. Both can be found in our region and appreciated for their beautiful colors as part of the woodland ecosystem.

Turkey tail (Trametes versicolor) is a bracket fungus, which means its fruits grow in shelf-like structures atop fallen logs and on the sides of tree bark. “It’s a very common denizen of our Chicago region, visible throughout the year because its fruiting bodies are incredibly durable and persistent for many months or even years after they appear,” says Bruch Reed, executive secretary of the North American Mycological Association. He is also foray co-chair of the Illinois Mycological Association (IMA), based in Chicago, and an editor for FUNGI magazine.

Turkey tail fungus typically comprises many small, fan-like turkey tails with alternating bands of light and darker color gray, black, brown or rust on the top side of the fruiting body. The underside is bright white to pale cream. Mushroom aficionado and IMA member Rob Poe, of Berwyn, says the first time he saw a turkey tail it was on a 12-foot-long log. “It looked like it was just covered in a rainbow. It was absolutely stunning.”

He and Reed have learned of the medicinal uses of turkey tail. The fungus, when gathered and prepared properly, is said to boost the immune system and aid in cancer treatments. Reed says traditional double-blind studies are being conducted and published about turkey tail’s medicinal properties. A recent study by the National Institutesof Health shows a certain preparation of turkey tail may improve the immune system of breast cancer patients.

“There are arguments about how these products are best created and which is most effective,” Reed says. “One thing is certain: No one actually eats this mushroom, because its tough texture would have you chewing for years. You should never ingest any wild mushrooms unless you personally are certain of their identity, proper preparation and potential effects.” 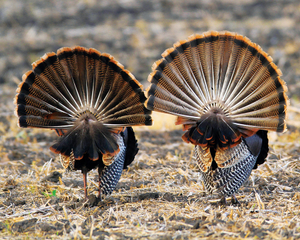 Poaching and foraging any mushroom in forest preserves and other natural areas is illegal, and Reed notes, “Turkey tail contributes to the health of a woodland ecosystem. It is host to various insect larvae and plays a vital role in the forest’s nutrient recycling process.” For those that want to enjoy the beauty of turkey tail fungus in the wild, Poe suggests looking for downed trees and small limbs that have fallen from trees within the last year. Turkey tail, like other mushrooms, produce fruits after rains, and sometimes don’t appear during droughts.

Poe says being out in the woods and seeing nature, including turkey tail fungus, every season of the year helps people understand and appreciate wildlife. He recently saw another kind of turkey in the northern Cook County Forest Preserve—about six wild turkeys (Meleagris gallopavo).

“They were in the woods going up over the hill,” he recalls. “I liked seeing them because it is one more sign of a healthy biome.” Several decades ago, Poe would not have seen a turkey in Cook County. In fact, in the early 20th century, the wild turkey, a native Illinois bird, was nearly extirpated from the state due to habitat loss and overhunting.

When early settlers came to America, wild turkeys were plentiful in Illinois, with reports of flocks of several hundred, according to the Illinois Department of Natural Resources (IDNR). A re-introduction program began in 1959 when seven turkeys from Mississippi were released into southern Illinois. For the next 40 years, wild turkeys were captured and released throughout the state, and in 1970 held its first wild hunting season in 67 years in southern Illinois.

Wild turkeys are three to three-and-a-half feet tall, with red, purple, blue and green feathers. Wild turkeys can fly up to 55 miles per hour for short durations, according to the National Wildlife Federation, and fly up into trees to roost at night. Wild turkeys prefer mature forests near edges and fields, and can be seen feeding on corn in agricultural fields. They also eat acorns, hickory nuts, wild grapes and even an occasional grasshopper, cricket or beetle.

“Turkeys are now found in all 102 counties in Illinois,” says Luke Garver, wild turkey property manager for the IDNR. “It’s pretty remarkable they’ve found their way into Cook and DuPage counties, especially since there were no releases of wild birds into those counties as far as my records indicate.” In 2014, wild turkeys were seen several times at Chicago Portage Woods and in 2015 along the Des Plaines River near River Grove. In April 2019, a wild turkey showed up near Chicago’s lakefront.

“It’s an amazing conservation success story, and really illustrates the resiliency and adaptability of the bird,” Garver says. “The population of wild turkeys in Illinois is relatively stable, but there are areas where turkey populations were higher and have declined over the last 15 years, likely due in part to declines in habitat quality and quantity. There are also areas where turkeys have never been very abundant and pioneering populations seem to be increasing. Turkeys can thrive anywhere where they can meet their basic needs: food, water, cover (including roosting trees) and a place to rear young.”

Garver explains, “They aren’t overly particular whether those needs are met in the Shawnee National Forest or on a golf course, just so long as they can access what they require with minimal disturbance.” Wild turkeys are typically wary of people and usually run or fly away when approached. In urban areas, they occasionally become a nuisance. That occurs mostly in spring, when males are strutting and seeking females. One way to keep wild turkeys at bay is to avoid feeding them, Garver suggests (Tinyurl.com/DoNotFeedTheTurkeys).

Pedro Quintanilla recently saw seven or eight wild turkeys in a field on Illinois Route 173 just east of Antioch while he was biking. “It was a great treat,” says Quintanilla, who works for the American Heritage Wildlife Foundation. In early fall this year, Linda and Steve Mader, of Lake Villa, saw a wild turkey near the entrance to Rollins Savanna Forest Preserve near Round Lake.

As winter commences, wild turkeys will congregate in small flocks; their young often remain with the female their first winter. Finding a wild turkey in the Chicago region is much less common than finding the turkey tail fungus, but either is a great Thanksgiving treat.