A meteor falls in the shy of stars (NASA)

One day last autumn, Andy Bulluck and his daughter Lydia took a night walk in their Glencoe neighborhood to look for the Orionid meteor showers. “The meteors were very bright and came one after the other,” Bulluck says. “My daughter was absolutely ecstatic.”

Bulluck, a member of the Skokie Valley Astronomers, is among many amateur astronomers in the region that look for meteors in the night sky, especially from late summer to late fall, when 10 to 50 or more an hour can be seen during showers.

Among their favorites to watch are the Perseids, which peaked this year on August 11 and 12, the Orionids, which will peak on October 20 and 21, the Leonids, which will peak in mid-November and the Geminids in mid-December, when on the right day, more than 140 might be seen in an hour, according to the American Meteor Society.

“Meteors are one of the most popular things you can look up at the sky with people,” Bulluck says. “Kids love it because they get to stay up late. The best observing is late evening into the early morning hours. Plus, watching meteors can be done with the naked eye. There’s no special equipment needed. It engages people of all ages. It helps take their eyes off the screen and moves them out into the world around them.”

Bulluck adds that sky watchers can go outside any day and have a chance to a see a sporadic meteor that’s not part of a shower. Gretchen Patti, founder of the Skokie Valley Astronomers, agrees. “If you’re just hanging out, looking at the sky, you may well see a shooting star,” says the Warrenville resident. “Meteors aren’t really shooting stars, but ‘tiny bits of space junk’, many the size of a grain of sand,” she says. 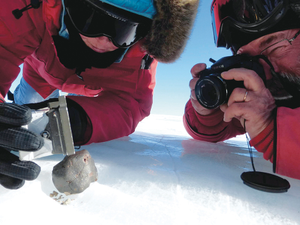 NASA astronomers collect a meteorite, a meteor that has fallen to the Earth, in Antarctica (NASA)

“In most cases, the meteors are leftover bits from a comet that went by. When they enter the atmosphere, they fall so fast and they heat up, and that makes them look bright,” Patti explains. Comets spew off all kinds of dust and gases and little bits of rocks and ice—that’s what makes the tail of the comet—all that cool stuff falling off the body. When the Earth moves through that cloud of dust and bits, we get a meteor shower.”

The meteors we see today could have been produced by comets thousands of years ago. “Occasionally, you’ll see big fireballs—gigantic meteors that last a couple seconds,” Patti says. “Anybody can see a fireball if you happen to look at the sky at the right time.” If a meteor hits the ground, which is rare, it’s called a meteorite.

Patti grew up in Racine, Wisconsin, where her father would take the family outside on a blanket and lie on the grass to watch for meteors. The best way to look for meteors is to lie on a blanket or in a beach chair and look up on a clear night in a place that’s not obstructed. “You want an open sky,” Patti says. “Having a clear sky is more important than it being really, really dark, but if you can get both, you’re golden. When there are showers of meteors, they seem to come from one radiant point, but they streak all across the sky, so you don’t have to look in just that one direction.” 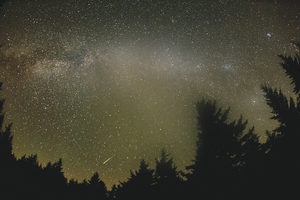 Finding the right spot can be challenging, especially beneath the bright city and suburban lights. Bulluck takes his daughter to places where there are no bright lights and a good view of the sky with few trees. “Public parks can be great places to go,” he says, adding parks along Lake Michigan have been productive. He’s had better views of the night sky while visiting Hawaii or North Carolina. “I’d encourage people when they’re on vacation to go outside and night and look. It really is a connecting experience with nature and the universe,” he says.

Those living in the Chicago region that want to see meteors and other nighttime celestial objects may consider going to the Indiana Dunes when the staff occasionally holds star parties. The Adler Planetarium and the Chicago Astronomical Society have hosted star parties at Cantigny Park, in Wheaton.

Audrey Fischer, board member and past president of the Chicago Astronomical Society," says Green River State Wildlife Area, in Harmon, is an excellent location to view a meteor shower. They have very inexpensive camping. And most, but not all meteor showers reach their peak just before midnight to an hour before dawn.”

Fischer also suggests people find an astronomy organization in the Chicago area to learn more about meteor watching. “The people are all really kind, and they want to help introduce the general public to the night sky,” she says.

Sheryl DeVore has written six books on science, health and nature, as well as nature, health and environment stories for national and regional publications. See more at SherylDevore.wordpress.com.

Light pollution in the Chicago region makes it more difficult to observe meteors and other celestial objects, according to local astronomers. This concerns Audrey Fischer, board member and past president of the Chicago Astronomical Society.

“Children in the region are growing up not seeing stars or knowing what they are,” she says, adding that studies have shown light pollution can harm the environment. Research suggests that artificial light at night can negatively affect human health, increasing risks for obesity, depression, sleep disorders, diabetes, breast cancer and more, according to the International Dark-Sky Association.

Fischer, who lives in the Beverly neighborhood of Chicago, says when she had a booth at A Taste of Chicago years ago, she set up a photo of the starry night skies and not a single child out of 200 that she asked knew what they were looking at. She helped them realize that stars get hidden by light pollution.

Fischer says individuals can reduce light pollution by the way they light their own homes, and they can talk to municipalities about installing next-generation LED lights that are warm white 2,200K or amber 1,800K, not bright white that has a blue wavelength. “We really have the technology now to have all the lighting now we want and need in our yards and our streets and still have the stars, too,” she says.