Artist and Animator Danny Casale Wants the World to Know: UR SPECIAL Anxiety, depression and self-doubt are not traditionally words associated with school-age children. Past generations may have instead described these children as troublesome, talkative, slow or shy, the “black sheep” and other derogatory explanations for their misunderstood behaviors.
However, the Centers for Disease Control and Prevention shares that one in six U.S. children have a clinically diagnosed mental, behavioral or developmental disorder. According to the Mayo Clinic, with or without a clinical diagnosis, school-age children can experience mental health related symptoms as a result of family life changes, bullying, food allergies and other short-term issues.
Los Angeles-based artist and animator Danny Casale, well-known as Coolman Coffeedan, understands firsthand how childhood mental health issues can impact how adults experience life. Casale grew up in Long Island, New York, describing himself as a misunderstood creative-type of kid in a “non-artsy” environment. He shares how bullying and confidence issues impacted his school life and contributed to anxiety and depression symptoms.
“Doodling, my art, in a very real way was the only thing that kept me awake in school,” Casale recalls. “I started building my confidence through art. And as other kids noticed what I was creating, doodling and comic art became my social currency. I learned that I could make people laugh and smile, and connect with them through my illustrations.” He explains how these experiences helped him learn to embrace and validate the uniqueness of who he was and gave him the confidence to keep sharing his animated stories.
But art was not just an outlet for Casale, who realized at a young age that although simple in style, these important messages can impact children and adults alike. Coolman Coffeedan first went viral in June of 2017 when his cartoon, “Snakes Have Legs,” accumulated tens of millions of views on YouTube. Following the success of his video, this self-proclaimed “bad animator” continued creating art in his unique style, springboarding his professional career and reaching hundreds of millions more around the world.
“These core messages are not said enough in our world. You are loved. You are special. You are okay exactly as you are. You will find the crowd that accepts and validates you.” Casale wants his fans to experience his art on and offline as a “shoulder to cry on” in a world that may not always get you. He also hopes fans see his work as relatable and digestible, enjoying the humor and fun of the storytelling. 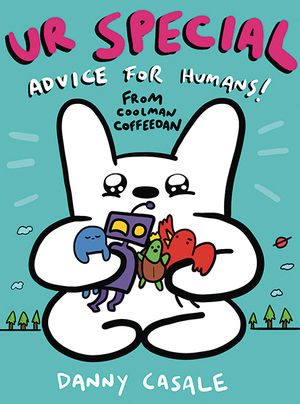 His interest in starting a bigger conversation inspired him to translate his animated characters into print with the launch of his book, UR SPECIAL: Advice for Humans from Coolman Coffeedan, on sale November 2. Each chapter introduces a new friend and a new hardship, offering a positive affirmation for the reader to take away. The book tackles serious mental health topics from loneliness to self-confidence utilizing Casale’s animated characters and comedic style. Longtime fans of Casale’s Coolman Coffeedan accounts can expect new material as once standalone characters evolve into and through a longer story message.