Chef Sebastian White of The Evolved Network does food prep for his culinary demonstration in Chicago on October 8.. Photo credit Bob Benenson.

There are nonprofit organizations that work to encourage young people from underserved communities to pursue careers related to food. There are also nonprofits that provide counseling and therapy for young people that have been challenged by poverty, crime and other social ills. Now there is a nonprofit, started in 2021 on Chicago’s South Side, that aims to do both. The Evolved Network is the brainchild of Sebastian White, a young chef and clinical psychologist.

In its current startup phase, the network is providing cooking classes in three Chicago schools for youth living in challenging circumstances. White is raising the organization’s visibility by conducting hands-on culinary demonstrations such as one on which he partnered with Gardeneers, a school gardening nonprofit, on October 8 at the Hangout Lighting events space; performing a chef demonstration at Green City Market on October 15; and a chef-collaboration dinner at UVAE Kitchen & Wine Bar, in the Andersonville neighborhood, on October 24.

White’s bold vision is to create Evolved Kitchen and Garden, a restaurant in Chicago with an onsite garden on which the young people in the program will work. The restaurant and garden will be the non-profit’s platform to teach its young charges about the benefits of farm-to-table eating while providing restaurant service training.

But that’s just the start. The plan also calls for providing individual and group therapeutic intervention and case management for participants, many of which have endured life-altering traumas. There will also be a curriculum to teach business management and financial literacy, which White says was influenced by the work of William White, his father. 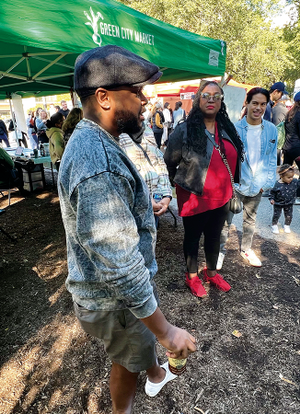 “We’re using the culinary to discuss how you can create better connections with your peers, how you can heal from different things that we’re doing, or the different tasks that we’re doing,” White says. He grew up in Dallas, in a more fortunate environment than many of the young people he is trying to help. His father was a developmental psychologist; his Aunt Gwen and her garden first taught him about growing food.

He learned how to cook watching his mother. “From the age of 5, I remember seriously making my breakfast before school and standing up on the counter watching her cook dinner,” White says. “It was just me and her. My mom was busy working and had other things to do, so food’s always been a part of my life in that way.”

After graduating from Trinity College, in Hartford, Connecticut, in 2012, he first taught at a Montessori school in the Washington, D.C. area, then came to Chicago to pursue his master’s degree in clinical psychology at The Chicago School of Professional Psychology. His first postgraduate job, starting in 2017, was as a gang intervention therapist working with vulnerable youth in Waukegan for the Community Youth Network Counseling Center, based in Grayslake.

“If you get the kids in high school, it’s too late,” White explains. “We decided to focus on middle schools within a district. A lot of my work was with kids who were either on the edge of being in [gangs]; some had been in already. We talked through that decision and that choice. I wouldn’t focus on it, but I would help them try to explore what their lifestyle is really like and if that’s something that they truly want.” He notes, “It’s interesting—all of the kids that I worked with that were in regretted it, and they all would tell it all the other kids, ‘If you’re not serious about this, you don’t want this life.’”

White found the work fulfilling, but pivoted to seeking an even greater purpose after the (non-COVID-related) deaths in early 2020 of two of the people most important to him: his Aunt Gwen, who he describes as a second mother, and his father. “I hate that that had to happen for me to figure out what I was supposed to be doing,” he says. “Everything’s clear. And it’s really cool that I can try to keep them alive through my work. And that’s my goal. That’s what drives me and gets me up every day.”

The garden space at Evolved Kitchen and Garden will be named “Gwen’s Garden” after his aunt. White said her acre-and-a-half growing space was where he learned to appreciate the farm-to-table concept. “We’d just walk through our garden and cut stuff,” he recalls. “That was therapeutic and powerful for me. And not only was it better for you, it tastes better—you just improve everything.”

White says part of his mission is to break a vicious cycle in which underprivileged kids believe that they are only supposed to eat cheap, less-healthy food. “Those stereotypes also impact how they feel about themselves, ‘I am less worthy, so I eat this … The rich eat this, I am poor, I must eat this.’ And that doesn’t have to be the case.”

Bob Benenson is publisher and writer of Local Food Forum, a newsletter that covers all aspects of the local food community in the Chicago region. He can be contacted at [email protected]. Stay on Top of Local Food News and More