Making something by hand—and getting good at it—can add a welcome dimension to our lives. The art of participating in craftwork gives us a sense of competence and completion that may be difficult to find in our digital, ephemeral world.

America’s resurging interest in arts and crafts today comes at a time when making things by hand seems an endangered activity. Why? In The Craftsman, sociologist and author Richard Sennett maintains that making things by hand is an, “enduring, basic human impulse, the desire to do a job well for its own sake.” He observes that craft and craftsmanship can enrich modern life in ways that might surprise us.

The Arts and Crafts movement, which reigned from the mid-1800s through the early 20th century, was a major response to a commercial trend that steered society away from handmade toward machine-made products in Europe and North America. The movement encouraged amateur, student and professional involvement in the making of furniture, decorative glass, textiles, pottery and other forms that are beautiful, as well as functional.

Yet today, we face a new barrier to creating more by hand, observes Monica Moses, editor-in-chief of American Craft magazine, published by the nonprofit American Craft Council. “Modern life offers a million distractions, a million ways to kill time, or at least stand by idly while it expires,” she says. Mindless television watching, puttering around on Facebook or playing computer solitaire add up. “Such semiconscious downtime can become a weekend, a habit, a lost opportunity.”

Although many people return to an early love of arts and crafts during their retirement years, the good news is that such creative pursuits are also being taken up by young makers, according to Moses. “The marvel of it is that young people in the digital age are embracing craft so enthusiastically, not just their iPods and phone apps. We’re lucky to live in a time when engagement with the practice of craft is expanding.” She cites the popularity of buy-and-sell craft websites such as Etsy, which reported 2010 sales of more than $400 million.

Moses, who makes jewelry in her free time, values handcrafting for a simple reason: “It feeds my soul,” she says. “Other parts of my life focus on the end result. When I’m making a piece, I’m focused on the process and I’m thinking, ‘This feels right.’”

Whether we wake to this artful phenomenon in childhood or later in life, it’s never too late to reap the benefits. According to crafters from various walks of life, such hands-on experiences help us to enhance our well-being, ground our everyday lives, and give renewed purpose.

Lenore Moritz, founder and curator of and blogger at Mom Culture Online, took her first jewelry making class when she was single and living in New York City. “I needed something to tether me,” she writes, “and I knew it would get me out of the office at a decent hour at least once a week.” She says that what started out as a whim turned into catharsis. “I loved toting my tackle box of crafting supplies and the act of using my hands to transform a silver sheet into wearable art felt mpowering. I became an accidental craftsperson.”

She found her best reward in finishing a piece, which she characterizes as, “... a crescendo I never knew in my day-to-day professional life.” She explains, “At the office, my world was nothing but to-do lists and complicated, open-ended projects; a sense of completion was rare. But in craft class, it was crystal clear when I had finished a project, and I reveled in that closure.” 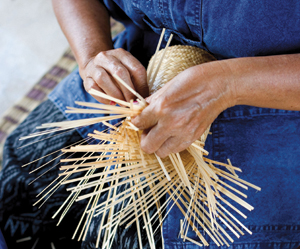 Jenny Barnett Rohrs spent 15 years as a music therapist in Lakewood, Ohio, helping people cope with life’s problems. Meanwhile, she loved decompressing at the end of the day by working with polymer clay to make beautiful beads, doll pins, nametags and other decorative items. “I was always a crafty, creative kid, learning to embroider from one grandmother and how to make seed flowers from the other,” she recalls. “Since both sets of grandparents lived through the Depression, they were always repurposing things, recycling before it was cool.”

As she continued to expand her range of crafting skills and interests as an adult, she also started blogging about it at Craft Therapy. “I am a self-taught crafter and never met a craft I didn’t like,” admits Rohrs. “I believe that crafting is an extension of yourself and how you view your world. It’s a way of expressing yourself, coping with life and gaining insight.”

As Rohrs continued to try out new crafts, materials, products and techniques, entries on her craft blog grew to the point that she launched a second one at CraftTestDummies.com, where she shares her evaluations. Earlier this year, she appeared on The Martha Stewart Show.

Regular posts track her adventures with various media, including her recent experiences with water-soluble ink blocks for drawing and painting, and making a booklet from envelopes. Other popular pastimes range from scrapbooking and making home accessories using beachcomber finds to gifting baby garments personalized with fabric paint decoration.

“I believe that creativity is innate,” comments Rohrs. “When you tell your inner critic to shut up, you can have a lot of fun and learn something about yourself. I especially love to encourage folks to try new things and new techniques, and to push their own boundaries.”

Sandra Palmer Ciolino learned to sew as a child, but didn’t maximize the creativity of her craft until her children were grown, when she was in her 40s. For Ciolino, of Cincinnati, Ohio, “Making contemporary quilts satisfies my desire to work in solitude and fulfills my longing to create lasting and beautiful art. Creating quilts for the wall marries many things I love—fabric, color, composition, piecing and machine quilting.” 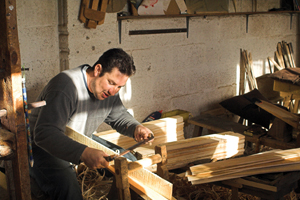 Ciolino fondly remembers her mother’s handiwork. “I have a vivid memory of her taking a navy blue overcoat of my father’s and using it to sew me a winter coat with cranberry piping; I was so proud of that coat.”

She began by making doll clothes, and then started sewing clothing for herself in junior high school, doing her own garment construction. “The technical stuff came early,” she says. Later on, busy with family duties and teaching elementary school physical education classes, she didn’t take time to turn to quilting until the mid-1990s. At first, Ciolino made her quilts in traditional pieced patterns to hang in her house or share as gifts; but then, something changed.

“I began to notice in my photography that I was most interested in close-ups of tree bark, ripples in water bodies and cracks in the rocks. My quilts then began to take on a more abstract quality,” she says. So Ciolino took a class in Columbus, Ohio, with Nancy Crow, recognized by many as “the mother of contemporary quilts,” and never looked back. She still gives quilts as gifts, but her work is now also exhibited at museums and quilt shows.

Like many craftspeople, Ciolino’s process in creating art is part technical skill and part intuitive imagining. When she starts a new quilt, she pulls fabrics from her workroom into groupings that appeal to her. She then takes a black-and-white photo to make sure the values of light and dark in the fabrics create an interesting pattern. Next, she uses a rotary cutter to cut the fabric by hand—like drawing a line with a pencil—into shapes freehand, without referring to any pat- tern. Finally, she sews the pieces together in a composition and uses machine quilting to add another layer of textural interest, finishing each creation by hand.

“The craft is when I make something as meticulous and impeccable as I can,” Ciolino concludes. “The art is when I bring an authentic version of myself—my voice and spirit—to the work.”

Judith Fertig celebrates the craft of cooking at AlfrescoFoodAndLifestyle.blogspot.com.