Ellen King, head baker and co-founder of Hewn Bakery (HewnBread.com), in Evanston, missed eating the really good, rustic European breads found in European bakeries after moving back to the Chicago area. Part of the problem, she quickly learned, was that most bakers don’t have access to heritage grains.

She’s on a mission to help bakers, chefs and home cooks gain access to better grains so they can not only help revitalize the grain economy, but to bake delicious bread like our ancestors used to make.

Why We Need To Support Local Grain Farmers

“Local grains are a vital piece for building regional foodsheds,” says Erin Meyer, MSRD, a consultant working with Artisan Grain Collaborative (GrainCollaborative.com), a collective of individuals, businesses and nonprofits working to promote a regenerative food system through the entire value supply chain from farmers to consumers.

According to Meyer, supporting the local grain community provides an opportunity to advance the three legs of sustainability: social impact, economic viability and environmental health. As more people want to put a face on where our food comes from and want to eating delicious and wholesome foods, supporting a regional grain economy is important.

“Grains grown by organic farmers bring farming back to the basics and do not sacrifice the safety of the product for speed or convenience. We need to support those farmers doing great things all around the U.S.,” King declares.

There’s another reason grains are important: they provide a lens to our local history that tells the story of a community. “Immigrants who came over here brought some of these seeds with them sewn into the pockets of their jackets!” says King. “Over the past couple of decades, these different varieties have become more and more extinct, and once they are gone, they are gone.”

That is one of the reasons King and several local midwestern farmers have banded together to form the Artisan Grain Collaborative: they’re working hard to revitalize the grain economy. The first step is to educate the general public why heritage grains are important, letting them taste the difference at shops like Hewn Bakery, and how to access them. She and her team work with many heritage grains that are unheard of by most of the public such as the Red Fife, Marquis and Rouge de Bordeaux.

The Rouge de Bordeaux is a wheat that was commonly grow in the 18th and 19th centuries in France, according to King, who uses it for all of Hewn’s whole wheat bread. “It reacts a little differently, and the bread has a true tang to it,” she says.

One of the most surprising heritage grain discoveries for King has been the Marquis, which was almost extinct. She worked with Andy Hazzard, of Hazzard Free Farm (HazzardFreeFarm.com), in Pecatonica, Illinois, to plant seeds they found through a professor that had a small amount. The first year, they harvested 30 pounds using scissors. This year, their third year, they harvested 3,000 pounds.

“We need the revitalization of the grain economy to happen nationwide, and we need to it to happen now,” says King. “It is a piece of history that cannot be lost, and I feel we are well on our way to a resurgence.”

King’s first cookbook, Hewn Heritage Baking, will be released on October 23; in it, King discusses not only the easy varieties we can get our hands on right now, but also recipes to try. Local grain can be found online and at local cooperatives or farmers’ markets throughout the city. Hewn also sells grain at their shop.

Some CSAs, including Prairie Wind Family Farm (PrairieWindFamilyFarm.com), in Grayslake, include heritage grains on occasion in their share offerings in an effort to support small-scale grain family farmers and introduce grains to a wider audience. Recently, subscribers received a special Hard Red Winter Wheat Flour from Molly and John Breslin, of Breslin Farms (BreslinFarms.com), in Ottawa, Illinois. Not only was the grain grown locally and organically, the flour is unique in that it was stone-milled locally and organically at The Mill at Janie’s Farm (TheMillAtJaniesFarm.com), an organic grain mill located in Danforth, Illinois. Janie’s Farm Organics is a member of the Artisan Grain Collaborative.

Local restaurants are getting into the scene, too, with many bakers producing loaves based on their needs, whether it be the size of the loaf or grains they use. They’re going as far as including on their menus where the wheat is grown, according to King, further helping to bring attention to those farmers and their brands.

Megy Karydes is a Chicago-based writer interested in sustainability issues. Find her at MegyKarydes.com.

In the bowl of a stand mixer fitted with the paddle, combine the flour, 75 grams (⅓ cup) of the sugar, the ginger nibs (if using), lime zest, baking powder, baking soda, and salt and mix on low speed until just combined. With the mixer running, slowly add the butter, a few cubes at a time, and mix for 1 to 2 minutes, or until the butter is the size of small peas. Do not overmix. The dough should look like wet, shaggy sand.

In a separate bowl, whisk together the starter, cream, egg, grated ginger, and vanilla. In another separate bowl, toss the peach with remaining 1 tablespoon sugar.

Slowly pour the cream mixture into the flour-butter mixture and mix on low speed until the dry ingredients are just moistened, about 45 seconds. Remove the bowl from the mixer and fold in the peach mixture with a rubber spatula.

Using a large knife, cut the dough into twelve 2½-in [6-cm] squares. Arrange the scones on the prepared baking sheet, spacing them about 2 in [5 cm] apart.

Bake the scones for 18 to 20 minutes, or until golden around the edges and a metal skewer or toothpick inserted into the center of a scone comes out clean.

Reprinted from Heritage Baking, by Ellen King with permission by Chronicle Books, 2018 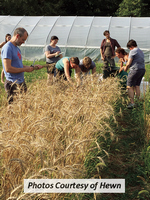