Looking for Loons in all the Right Places by Sheryl DeVore
The last time common loons nested in Illinois was in 1892, in Lake County. But the unique birds with their eerie tremolos can still be seen and heard each spring during migration as they rest and feed in Lake Michigan, deep inland lakes in the Chicago area and large reservoirs downstate.
“Seeing a loon in March is the perfect antidote for cabin fever,” says Jeff Sanders, a Skokie resident who leads a Lake-Cook Audubon Society loon trip for the public at the end of March. “Loons are so majestic. They seem to have a calmness about them,” he says. The loons are flying north in spring from southern coastlines to their breeding spots near northern Canadian lakes. The Chicago region is in their migratory pathway.
Common loons (Gavia immer), called “great northern divers” in Europe, can be identified fairly easily because they are larger than other waterfowl such as mallard ducks. They sit low in the water and in spring, are wearing their breeding plumage. Both male and female have an almost iridescent, greenish-black, angular head, red eyes, white necklace and black-and-white checkerboard back. They also have a daggerlike bill for spearing fish when they dive underwater.
When they dive, they return to a completely different spot from where they started. Loons are not at all adept on land because their feet are so closely positioned to their bodies. That helps them propel underwater to get their prey of fish. Although most birds have hollow bones, the loon has some solid bones that help them while fishing underwater. However, the solid bones also make it more difficult for the loon to take off from water. They need some room to flap and skim as if on a runway before becoming airborne.

Loons can typically be seen in this region about the middle of March through mid-April, with some lingering into mid-May and an occasional individual spending the summer. But they haven’t nested here in more than 100 years. Loons have not only disappeared as breeding species in Illinois, but also Indiana, Iowa and Ohio, according to the Cornell Lab of Ornithology. In the Midwest and eastern U.S., loons continue to nest in Minnesota, Wisconsin and Michigan. (Photo: U.S. Fish & Wildlife)

They require large, deep lakes with islands for nesting and do not tolerate human disturbance. Lead poisoning from fishing sinkers and mercury-laden pollution emitted by power plants negatively affect the loons’ breeding success. It’s too cold to get out the motorboats in March and April in the Chicago region, and that gives loons flying north a place to feed and rest for a bit.
When the ice begins to thaw on lakes, that’s the time to look, according to Sanders. “The best time is when at least a quarter or half of the lake is still ice,” he says. “It keeps the water calmer. There are not a lot of waves. It means the loons have just come in they’re not in a hurry to leave when they lakes are half frozen.”
Locally, loons can sometimes be seen singly, in pairs or even by the dozens on Diamond Lake, in Mundelein, Pistakee Lake, in Fox Lake, Bangs Lake, in Wauconda, and other deep bodies of water populated with fish the loons eat for energy to fly north, according to David Johnson, of Buffalo Grove. He has led public loon tours for the Evanston North Shore Bird Club and the Illinois Ornithological Society. Those that know the right place to look are practically guaranteed a view of at least one and likely more than one loon at a time in deep waters of the region, Johnson and Sanders agree.
Sanders says he first started watching loons by attending Johnson’s loon tours, which begin at Diamond Lake. Then they travel to other deep, glacial lakes in the region. Loon lovers also check spots along Lake Michigan such as Montrose Point, in Chicago, and Gillson Park, in Wilmette, to search for the northern divers. “But sometimes the lake is choppy, so it can be difficult to get good looks at them,” Sanders says.
Karen Lund, of Genoa, Illinois, often joins Johnson a day before he leads field trips to see loons in spring. One year, they saw nearly 700 loons on one day in Lake and McHenry counties, she notes. Deep lakes in Cook and DuPage counties also attract loons in spring, according to Vince Moxon, of Wheaton. One of his favorite loon-watching lakes is Silver Lake, at Blackwell Forest Preserve, in DuPage County.
Occasionally during migration, especially early in the morning, loons give their haunting yodels and tremolos, invoking a sense of the north woods. Observers can see loons flap their wings, sometimes practically standing on their hind legs to display for females. They also watch them sink low into the water like a submarine before diving to feed and then when they re-emerge above the surface.
It can be quite cold when looking for loons, and over the years, Johnson said he and his loony friends have endured 29-degree temperatures with snow squalls and high winds. Some years, it’s balmy watching loons. Observers should dress in layers and be prepared for cold and wind.
Mark Wallner, who lives just over the border in Wisconsin, looks for loons at Sand Lake, at the north unit of Illinois Beach State Park, in Zion. One year, he saw 21 loons on the small lake. He guesses it was because the weather had turned cold and the loons knew better than to continue flying north, where lakes would still be frozen. “It was fun to watch them bully the red-breasted mergansers once in a while by sneaking up on them from under the water and scaring them,” Wallner says.
While watching loons, observers also can see a variety of other migratory waterfowl, Sanders says in March and April, observers often see mergansers, goldeneyes, scaup, bufflehead, ring-necked ducks and redheads that dive for food in deep lakes, just as the loons do. “You’ll be able to pick out the loons because they are two or three times bigger than the ducks,” Sanders says.
Sheryl DeVore has written six books on science, health and nature. She also writes nature, health and environment stories for national and regional publications.

Loons: How and Where to Find Them 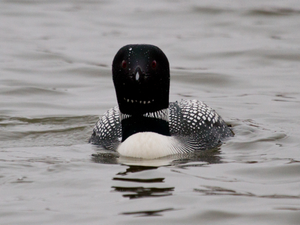 Those looking in spring for loons might try the following places from mid-March to mid-April. Bring a scope and/or binoculars, and stay off private property. Dress in layers and be prepared for cold, wind and seasonal outdoor conditions. More identification tips can be found in bird books and the Cornell Lab of Ornithology: AllAboutBirds.org/guide/Common_Loon/id. (Photo: Nat Carmichael)

Pistakee Lake, Fox Lake. Park at the dead end intersection of Grand Ave. west of U.S. 12 next to Dockers.

Silver Lake, Blackwell Forest Preserve. Entrance is off Butterfield Rd., west of Winfield Rd. Park at the top of the hill at the north end where the loons are generally seen. 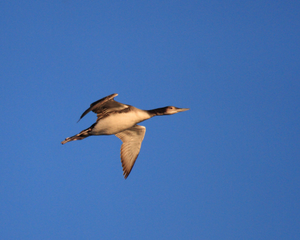 Lake-Cook Audubon Society will meet at 8 a.m. Mar. 29, in the parking lot across the street from Diamond Lake on Diamond Lake Rd., in Mundelein. No registration is necessary. Car pooling is encouraged: LakeCookAudubon.org.