by Sheryl DeVore
Birders both novice or advanced get downright giddy in May, because that’s the peak time for some 30 species of wood warblers to migrate through the Chicago region. Their names are descriptive; black-throated green warbler and yellow-rumped warbler, for example, as well as referential, such as the Nashville warbler, first discovered in Tennessee. The males are in their stunning breeding plumages now as they head north to raise a family.
When Maureen Marsh moved to the Chicago area 10 years ago, she discovered the joys of warbler watching. “It was the beginning of May at Ryerson Woods [in Riverwoods]. The leaves were just coming out and when the sun started to hit the top of the trees, I saw a blue-winged warbler,” says Marsh, who is certified as a University of Illinois master naturalist. She also serves as secretary for the Lake-Cook Audubon Society and leads warbler walks. 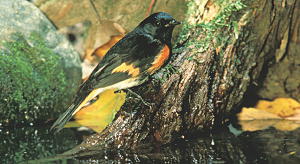 The American redstart is a warbler commonly seen in the Chicago region in mid-May. Photo courtesy U.S. Fish and Wildlife Service.
“My overwhelming feeling was, ‘Wow, this is so beautiful.’ It’s such a special time of year. Illinois is such a good migratory flyway for warblers. We are so fortunate to see this,” Marsh says. On the right day in May, a warbler watcher might see 25 or more different warbler species. Marsh and fellow master naturalist Cathy Walz created a printable online warbler guide to the Chicago region available online.
Marsh says she’s learning how important warblers are to maintaining healthy oak woods, and that climate change is affecting the relationship between plants and birds. Warblers are five-to-six-inch-long insect eaters. Many live in Central and South America in the winter and are part of a larger group of birds called neotropical migrants. These birds migrate in spring northward to their breeding grounds. For example, the yellow-rumped warbler breeds in boreal forests. Some species like the yellow warbler remain in the Chicago region to breed.
They may be called warblers, but many of their songs sound nothing like a warbling melody. Some, like the fairly common black-throated green warbler sings what sounds to some like a buzzy, “Zoo. Zee. Zoo. Zoo. Zee.”
The most common warbler seen in the region is the yellow-rumped warbler. On occasion, it remains in parts of Illinois in winter, but most start coming through in March and April, with peak numbers in early May. The male has yellow shoulders, crown and rump contrasting with a blue body, black cheek and white throat. The females, as with many warbler species, arrive later and appear drabber. A beginning warbler watcher can see plenty of yellow-rumped warblers in the neighborhood or at a local forest preserve in late April into mid- to late May, especially along rivers.
Other common warblers seen in the region include yellow warbler, black-and-white warbler, which arrive earlier than other species such as the American redstart, and a black-and-orange warbler that fans its tail as it searches for food.
Warblers are being studied nationwide, and scientists are learning ways global climate change is affecting their relationship with oaks and other trees. “Warblers time their migration to pass through the region when the oaks are just starting to leaf out,” says Douglas Stotz, senior conservation ecologist at The Field Museum.
Insects are attracted to the buds and early leaves, and in turn, warblers are attracted to the insects for food. When the leaves fully emerge, they contain chemicals that deter insects. So the warblers have to be there right when the insects are. “With climate change, plants are leafing out earlier,” Stotz says. Some warblers are also migrating earlier, but they’re not keeping up with the plants.
“That has been shown in studies in Wisconsin and some in Illinois,” he says. “It’s a fairly general pattern. If this happens erratically, it’s not an issue. If it becomes the standard, then it becomes a huge issue. That’s where we’re headed if climate change continues.” Stotz notes that this scenario is not only happening with warblers, but also a host of other migrants that live in the neotropics in winter. 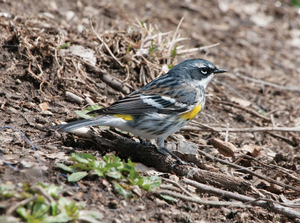 The yellow-rumped warbler is the most common migrant warbler in the Chicago region and arrives ahead of most of the other warbler species. Photo by Laurel Ahlenius.
Stotz’s favorite warbler is the golden-winged warbler. “It’s very pretty and it has an interesting song,” he says. The bird with a golden head and wings complemented by black throat and cheek patch sings one buzz, followed by three more on a higher pitch. “In the Chicago area, it’s mostly an inland migrant,” Stotz says. “It likes oaks and it takes advantage of other plants that are in flower such as cherry trees and crab apples.” The species is declining likely due to climate change, habitat loss and other factors.
Stotz spends many hours in May searching for warblers at Grant Park, in Chicago, but plenty of other places in the region also provide habitat for migrating warblers. “Forest preserves near the Fox, Chicago and Des Plaines rivers are all corridors through urban environments, and that makes them crucial for warbler migration,” Stotz says.
Habitat in people’s yards is an important component for warblers and other migrant birds in the Chicago area, he adds. “For warblers, the big thing is canopy trees—oaks, hickories, hackberries.” Maple trees, although native, aren’t as attractive to warblers, he observes.
Marsh agrees, advising homeowners should avoid using pesticides that kill the insects warblers eat. “Warblers are particularly attracted to water,” she says, recalling the time a prothonotary warbler, with a golden head and body, visited a water feature in her yard.
Sheryl DeVore has written six books on science, health and nature. She also writes nature, health and environment stories for national and regional publications.

Tips and Resources for Warbler Watching 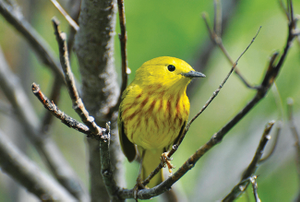 Warblers migrate overnight and often land in neighborhoods in the morning where vegetation signals available food. Here’s how to search for warblers near home, plus some online resources.

A Cornell Lab video shows how migrating warblers can be found even in small areas.

For a total immersion in warbler identification, consider an online course.