Shortly after the shutdown, Vicki Nowicki, an award-winning gardener who teaches gardening and food preservation in Downer’s Grove, popped into a grocery store for some olive oil. “I couldn’t believe the store, shelves mostly empty,” she says. “It suddenly occurred to me that most people don’t have stored food at home.” Food shortages have led many to consider gardening, and harvest season is the perfect time to learn preservation techniques for maintaining fresh flavors all year long.

Alongside the benefit of having food stores at home, preserving food gives us control over the source and growing method of ingredients. “We can cover the winter with food and know exactly what’s in it,” Nowicki says.

Brekke Bounds, education and partnerships manager at Chicago’s City Grange gardencenter, loves dehydrating because it doesn’t require special equipment. “If you’ve got an oven, you can do it,” Bounds says. “Decent dehydrating machines can be purchased for about $50, but an oven that has a proofing setting or goes down to a temperature of 150 or less will work.”

Before dehydrating, consider the intended use. Peaches or cherries can be cut into bite-size pieces. Roma or cherry tomatoes, sliced or cut in half and dried, can go in winter soups and stews. “Apple chips are super-easy,” Bounds says. “Core and slice with a mandoline, dunk in a lemon solution, sprinkle with cinnamon, dehydrate and then store in an airtight jar.”

Drying herbs is a breeze. Just tie a bouquet and hang it in a low-light area for a couple of weeks. Once completely dry, pop the leaves into an airtight container for fresh flavor up to a year. For tea and single herbs, keep the leaves whole for storage and break them up before use. The exception would be when making herb blends or salad toppings. Dehydrated celery, onions and garlic can be chopped in a food processor to make a soup mix or combined with salt for seasoning. “Having it all broken up at the beginning makes it easier to grab and use,” Bounds says.

“One of my go-to methods is water bath canning,” says Emily Paster, author of The Joys of Jewish Preserving. “It’s a really safe and effective method of home preservation for high-acid foods. Certain kinds of microorganisms, most specifically botulism, can’t live in a high-acid environment.”

Fruits that go into jams and jellies are typically acidic enough, and acidity can be increased with lemon juice. Vegetable pickles become acidic through the addition of vinegar. Heat-sealed jars are shelf-stable if the seals remain intact.

Paul Fehribach is chef and co-owner at Big Jones, in Chicago. The southern heirloom cooking restaurant has a homesteading sensibility and supports local farms by using seasonal ingredients. Folks there do a lot of canning.

For canning pickles and preserves, Fehribach recommends a simple kit that includes a tool used to lift jars in and out of boiling water and a jar rack that sits in the bottom of a stock pot. Mason jars with new canning lids can be used to hold the food.

Both Paster and Fehribach recommend using professionally tested recipes. “Go to a reliable source, whether it’s a cookbook or a website, because there are some food safety issues. Recipes have been calibrated to have the right ratio of water and vinegar to vegetables to ensure it’s acidic enough,” says Paster. “Pickles are a great place to begin, because they’re really hard to mess up.” 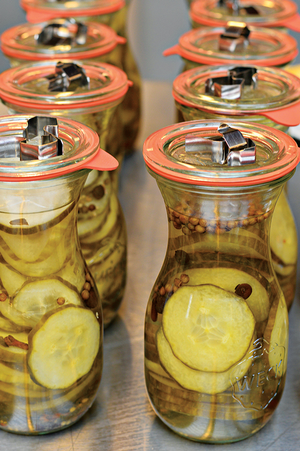 “I often recommend starting with refrigerator pickles,” says Fehribach. Since they are refrigerated, there’s no need for the water bath canning process. Pickling isn’t just for cucumbers. Green beans, carrots, okra, onions, cauliflower and green tomatoes make excellent pickles, which can be dill, spicy or sweet.

“Fermentation is used for everything from sauerkraut to kimchi,” says Fehribach. “There’s all sorts of specialized equipment you could buy, and you can spend a lot of money on it, but it’s really not necessary. I would say invest in a good airlock, and that’s about it.” NSF-certified food containers or glass jars of any size work as containers. There just needs to be room for gases to escape; the airlock prevents oxygen from entering and causing spoilage.

“I’d recommend The Art of Fermentation, by Sandor Ellix Katz,” says Fehribach. “Mostly because it’s a fascinating read, but it will also give you the confidence to proceed with fermentation as a preserving technique.”

Many fruits and vegetables freeze well with little to no processing. A basement or backyard root cellar is a no-electricity, cold storage method. “It’s a moist environment below the permafrost that replicates the conditions of the garden for vegetables that would be overwintering outside, such as carrots, cabbage and kale,” says Nowicki.

Curing and storing foods in a dark, dry, cool (about 55 degrees) room is one way to keep onions, garlic and potatoes. Curing prevents problems with fungus and bacteria. It’s done by laying the harvest in single layers in partial sun for about four days to kill surface pathogens. Crops are then put someplace dark for another two weeks. Allium stems must dry to the base, sealing off the bulb. Potatoes and onions can be stored in bags or boxes. Pumpkins and squash can cure in partial sun until the skin hardens. If washed after bringing them in and stored not touching, they can last a year.

Food preservation extends the blessings of the harvest. All it takes is a little preparation now to have many edible delights for months to come. 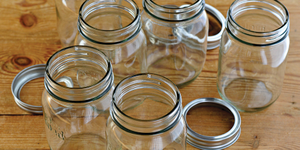 Grind first six ingredients with ½ cup of the oil. Add remaining oil gradually, until smooth and thick (up to a total of 2 cups). Taste for flavor and adjust. Place in jars and store in the freezer.

Rough chop the garlic, herbs and about 4 teaspoons of the coarse salt. Alternatively, process in a food processor to get fairly small, uniform bits of herb and garlic. Toss the chopped mixture with the rest of the salt and spread to air dry (about a day, depending on humidity). Can also place in a dehydrator on low for an hour or so. 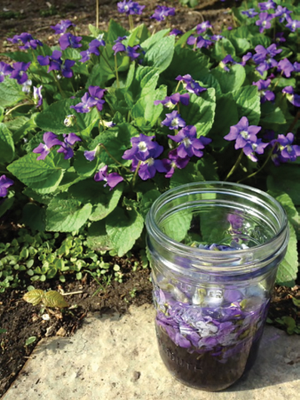 2 cups sugar per cup of juice

Collect enough violet flowers to fill a pint jar. Stuff the jar with as many flowers as possible. Cover the blossoms with boiling water and cover. Keep out of bright sunshine for 24 hours.

Strain the infusion through a coffee filter, removing blossoms and debris. Place the juice in a heavy saucepan. Add the lemon juice, mix thoroughly and bring to a boil. Boil for one minute. Add sugar and pectin. Bring to a hard boil and hold for 1 minute. Turn off heat, skim surface.

Pour into hot, sterile jelly jars and apply sterile lids and rings. Process in a hot water bath for 10 minutes. Lids should pop and seal when you take them out. Let the jars stand overnight.

Pickled green beans, known as dilly beans, is a forgiving first project for a novice canner and the results are exceptionally tasty. An old-fashioned pickle, dilly beans have become trendy in recent years and a jar of artisanal dilly beans sells for anywhere from eight to 10 dollars. For the same money, we could easily buy enough green beans to make the eight pints that this recipe yields.

Dilly beans, like most pickles, need several weeks to cure for the flavors to develop fully. Be sure to mark the date that you made the pickles to know when to open the jar. If eight jars is too much, halve the recipe.

Trim the ends off the green beans and cut the longer beans to a uniform length so that they will fit in a pint jar leaving at least one-half-inch headspace.

Combine the vinegar, an equal amount of water and the pickling salt in a saucepan and bring to a boil. Remove from heat.

Ladle the brine into the filled jars leaving one-half inch headspace at the top of the jars. Bubble the jars and wipe off the rims with a damp cloth.

Place the lids on the jars and screw on the rings just until you feel resistance.

Process the jars for ten minutes in a boiling water bath.  Allow the jars to cool in the water for five minutes before removing them.

Check the seals and store in a dark cool place for up to one year. 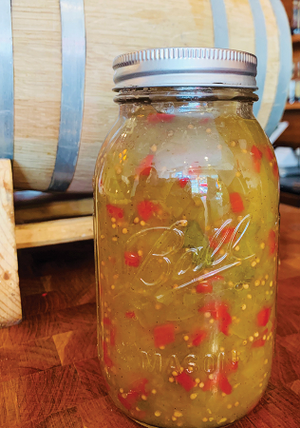 Piccalilli is one of the early exotics that resulted from the expansion of the spice trade in the 18th century, giving expression to turmeric, in addition to cinnamon, cloves and ginger in many recipes. It’s one of the most versatile pickles; a perfect balance of sweet, sour, tart, bitter and spicy, plus a broad range of aromatics, makes it pair well with anything. Over the course of the year, serve it with fish, fowl, beef, cheese and vegetables, in salads, with roasts, grills and gravy dishes. It keeps well too, making a great basic relish to keep around the kitchen.

Place all ingredients in a 4-quart nonreactive stock pot and slowly bring to a boil, stirring occasionally with a wooden spoon. Reduce to a low boil and cook for 30 minutes, uncovered, stirring frequently. Strain in a 4-quart colander and discard liquid. Allow vegetables to drain in a well-ventilated spot for 30 minutes before continuing with stage two.

Place the drained vegetables in a large mixing bowl and add the vinegar, salt, sugar, allspice, celery seed and mustard. Ladle into canning jars and stuff one cinnamon stick and two bay leaves into the center of each. Place fitting lids on jars and store in the refrigerator for up to two months or can according to standard canning instructions.