Life Goes on Beneath the Frozen Midwest Terrain A pond with a layer of soft snow above the ice may seem to harbor little or no activity, but underneath, where there’s still open pond water or a muddy bottom, life goes on in winter, just at a much slower pace. Animals such as fish, turtles and frogs that live there year-round can withstand the Chicago region’s climate. “These species have adapted to survive in cold water,” says Steve Silic, fisheries biologist for the Forest Preserves of Cook County.

Many fish species and reptiles such as turtles and amphibians, including frogs, are ectotherms. That means they don’t produce their own heat like mammals do. “The term gets used synonymously with the term cold-blooded, but more specifically, their body temperature changes with the environment,” explains Silic. 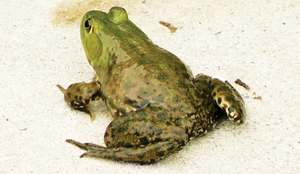 Dropping water temperatures and diminishing daylight hours, as well as hormonal changes in fall, trigger fish, reptiles and amphibians that live in or near the water to prepare for winter by building up glycogen in their bodies as winter approaches. “They convert glycogen into glucose, and then the glucose can be transported to cells and used like an antifreeze to prevent cells from freezing and causing death,” says George Klut, a Forest Preserves of Cook County naturalist at Little Red School House, in Hickory Hills. “As long as the cells don’t freeze, a fish, frog or turtle can survive in winter,” he says.

In winter, fish seek a depth where the temperature is most comfortable, venturing farther down as it gets colder. Beneath a pond that appears completely frozen is a lower layer of water that’s cold, but comfortable enough for fish to live. “As long as they don’t get trapped in the ice, they should survive,” Silic says.

Their metabolism slows and they are mostly inactive, but they’re still alive, and will move around on warm winter days just enough for an ice fisherman to catch them. On warm, sunny, winter days when the light penetrates the ice, fish may become even more active, swimming around and munching on tiny plants and animals closer to the bottom of the lake. Some aquatic insects have developed a type of antifreeze in their blood that allows them to survive in frigid temperatures and give fish that occasionally get active in winter something to eat.

Even in winter, water quality is important to fish living in the Chicago region’s small lakes, ponds and wetlands. In summer, too many plants can reduce the amount of dissolved oxygen and can lead to fish kills. But something similar can happen in extreme winters when the ice gets too thick for light to penetrate, preventing plants from producing oxygen in the water. “A really bad winter seven years ago at the lakes had close to two feet of ice that was not clear enough for sunlight to get through,” Silic says. “Oxygen levels in the water got very low, and that was pretty detrimental to fish species.” 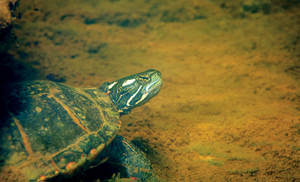 Amphibians and reptiles, or “herps”, go through a process called brumation in winter. It’s not the same as hibernation, but rather a slowing down period of sluggishness or inactivity, similar to what happens with fish. “Aquatic turtles will go through brumation under muck in ponds, but become active in the water if temperatures rise a bit or if sun penetrates the water on winter days,” Klut says.

Bullfrogs, including adults and tadpoles, make their way to the sediment in the bottom of a pond and bromate there. “They can absorb oxygen from the water through their skin. If it gets warm enough, they might get active again and then hunker down again,” Klut says. Spring peepers, Western chorus frogs and wood frogs, which are much smaller than bullfrogs, breed in water, spend summers beneath cool mud and then spend winters in leaf litter. “They essentially freeze and thaw out again,” Klut says.

The wood frog, the only frog species found north of the Arctic Circle, is among the most adept at withstanding frigid temperatures. Their heart stops beating and the lungs stop working, and yet as spring approaches, the lungs thaw out and the heart beats again. Scientists have studied wood frogs because of their ability to tolerate frozen conditions and hope to learn more that could help people with diabetes or in need of organ transplants.

Klut sees signs of herps preparing for winter at the indoor exhibit at the Little Red Schoolhouse, where he works. “Even though the building is warmer than it is outside, herps can pick up on changes such as less sunlight,” he says. “They also have a circadian rhythm; an internal clock, which triggers them to build up glycogen and go into brumation.”

Two alligator snapping turtles kept indoors for an exhibit stop eating from November through about March, Klut says. “They’ll be a lot more sluggish and sit at the bottom.” As April approaches, those turtles become more active, and when the ponds and lakes start to thaw, they will be back sunning themselves on logs while frogs begin another season of calling from the water.