Male eastern bluebird at The Preserve at Oak Meadows Golf Course, in Addison

In the mid-19th century, Henry David Thoreau hung a wooden box in a poplar tree, hoping a pair of bluebirds would nest. They did, inspiring his poem The Bluebirds. Were he alive today, Thoreau would have likely been happy to learn that bluebirds are nesting in many manmade boxes all over the country, including in the Chicago region. Hundreds of volunteers in Chicago and the suburbs are tending to nest boxes set up to give these songbirds a place to raise their young.

In 2016, Jeff Wade erected a bluebird box at the West Ridge Nature Park, in Chicago. “Five days after I put up the box, bluebirds were building a nest in there,” recalls Wade. They raised three young that year. Since then, Wade has been checking the box at least weekly, spring through summer, and reporting his data to the Cornell Lab of Ornithology.

Three kinds of bluebirds—western, mountain and eastern—are native to North America. Those in the Chicago region are eastern bluebirds, which are about six-to-eight inches long. Males have blue backs and heads, red breasts and white bellies. Females have more subdued colors. Bluebirds can be easily distinguished from the more gregarious blue jays that have white and blue bodies with crests on their heads.

Eastern bluebird populations drastically declined in the early 20th century for several reasons, including the introduction of European starlings and house sparrows to the U.S. from Europe. These nonnative birds began usurping bluebirds’ natural tree cavities in which they nested and then used the cavities to raise their own young.

In the 1960s and 1970s, humans began building nest boxes designed to keep the starlings out and give the bluebirds a chance to raise their young. They set up bluebird trails, a line of nest boxes in suitable habitat, typically an open field near scattered trees. The North American Bluebird Society formed in 1978. The group shares information with bluebird monitors on ways to deter predators and nonnative nesters, among other techniques, to ensure successful nesting of bluebirds.

Bluebird numbers have increased since then. As long as people continue to monitor and erect bluebird boxes, their population should remain stable, according to the Cornell Lab. Their recent report shows that in the northeastern region of the U.S., which includes Chicago and other parts of Illinois, monitors reported 4,580 bluebird nests, with nearly all producing three to four young in one season. In Lake County alone in 2019, volunteers monitored 637 boxes with 400 young fledged, meaning they were able to leave the nest and fend for themselves, according to Jack Nowak, of Grayslake, who has been monitoring bluebird trails for about 15 years. His wife Pat helps him check 20 boxes at Brae Loch Golf Club, in Grayslake. Golf courses and cemeteries, as well as nature preserves with suitable habitat, have proven good spots to erect bluebird boxes.

Wade, who has always loved birds, said he won a bluebird box during a McHenry County Audubon Society outing, but he wasn’t quite sure what to do with it. He wondered if he could find a place close to his Chicago home to erect and monitor it. He found it at West Ridge Natural Area, 5601 N. Western Avenue, in Chicago, established by the Chicago Park District,  in 2015 on 21 acres within the Rosehill Cemetery.

“I learned how to approach the bluebirds. I learned how to monitor them. The more I learned, the more fascinating it became. I go out every four or five days during the nesting season,” Wade says. He uses a hand mirror to see if there’s a nest inside and whether eggs have been laid.

Though the bluebird boxes are too small for starlings, house sparrows do try to take them over. “I’ve been super-aggressive against house sparrow predation in my boxes. It’s the city. It’s right on Western Avenue. We have plenty of house sparrows,” Wade says. “They’ll kill the brood or kick them out.” Wade found that something called a spooker, which contains shiny metal, keeps the sparrows away.

Ron Olsen, of Addison, who has been monitoring bluebirds for nearly 25 years, says that’s the only way to be when caring for bluebirds—especially in the city. Monitors need to be committed to checking the boxes and finding ways to keep the aggressive houses sparrows away. They also need to know the timing for checking the boxes. “The nest boxes must not be opened after the chicks are 10 days old. They know fear by then, and will jump out and usually can’t be caught to place back in,” Olsen explains. “If you do catch one or two, they won’t stay in the box. The nesting will be ruined.” He opens the box to remove the empty nest and clean it only after the young have all fledged.

Olsen started the first bluebird trail in DuPage County Forest Preserve at Blackwell Forest Preserve about 22 years ago, and agreed to monitor the boxes and turn in data. “The first year, I got a pair that fledged young,” he recalls. “I just happened to be there when the male coaxed them out of the box.”

Today, volunteers for the forest preserve district monitor 17 different bluebird trails. Olsen monitors a bluebird trail of about 15 boxes at The Preserve at Oak Meadows golf course, in Addison. He, like other monitors, knows that tree swallows and house wrens—both native species—find the manmade bluebird boxes a great place to raise their young, too.

“I try to place my boxes where the wrens won’t like them; for example, away from brush,” he says. Olsen also has devised a method of keeping the tree swallows away by hanging his invention of wire, straws and metal screws on the bluebird boxes. “There are a ton of tricks I’ve learned,” he says. “I use a deodorant soap and rub that underneath the ceiling of the box, and that keeps the wasps away.”

Olsen has permission to band the bluebirds, and has found over the years that adults will return to the boxes if they were successful, and that chicks often return to their natal homes. “I had a male I called Grandpa,” Olsen recalls. “He was an adult the first year I banded him. He came back every year for four years after that.”

Olsen says he’s happy to share what he’s learned about caring for bluebirds with others. Wade hopes to continue learning. He says he expects he’ll be watching his bluebird box in Chicago for many years to come. “I can’t stop 90 tons of plastic going into the ocean every day, but maybe I can provide an unexpected home for cavity nesters in the middle of the city,” he says.

How to Become a Monitor 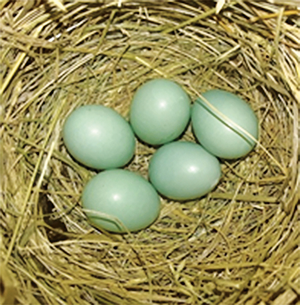 Birdhouse monitoring requires weekly trips for most of the late spring and summer. Early in the spring, the houses must be cleaned and repaired. Then the monitor opens them regularly during nesting season to check for inhabitants. When chicks reach a certain age, the monitors stop opening the boxes so that the young won’t leave their nest too soon. At the end of the season, the monitor cleans the houses and sends in data. In early winter, bluebird monitoring workshops are often held in the region for beginners. Local forest preserve districts and state natural areas have listings on their websites.

Where to See Bluebirds 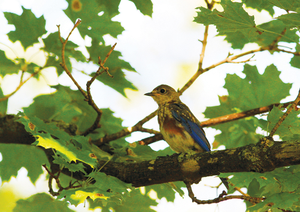 Public spaces at forest preserves, nature centers and state natural areas with established bluebird trails provide a way to see these gems of blue, especially in June, when they are actively caring for a family. Here are some places to go. Call first to check on hours. Bring binoculars and stay a good distance away from the boxes. May is peak time for birdwatchers and nature lovers to hear and see about 30 species of warblers as they migrate through the Chicago region. Birdwatching is a fun, eco-friendly way to enjoy nature and get outside while staying at home. Read More »
In-Print, Green Living Nature Chicago Park District Birds June 2021 Jeff Wade West Ridge Nature Park North American Bluebird Society Jack Nowak Ron Olsen