Songbird migration is mostly over, but there’s another group of birds just starting its migration. They’re large, easy to see and colorful—ducks. The word duck often is equated with mallard, because that’s the most numerous duck in the region. The male is easy to identify with its iridescent green head. But at least 25 species of ducks migrate through northern Illinois every fall and spring, and observers can spot them in large and small lakes, as well as rivers and wetlands. Some of the fall migrants even remain in large, open-water lakes throughout winter. 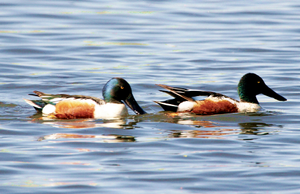 Unlike other bird species such as orioles and tanagers, ducks are in their fresh breeding plumage in fall, having molted in late summer. Many duck species lose flight feathers in late summer and hide in the vegetation, but once their plumage returns, they’re off to migrate and find water in which to rest and feed.

Al Stokie, of Park Ridge, has watched ducks in autumn as far south as Heidecke Lake, in Morris, and as far north as Illinois Beach State Park, in Zion. One rainy October day with the winds coming from the east, Stokie hit the waterfowl bonanza at Gillson Park, in Wilmette. “It was a cloudy day with periodic rain, which caused us to all take shelter under the beach house roof, from where we kept watching in the rain,” Stokie recalls. “The number of ducks flying by was quite impressive.” Stokie and his companions saw large numbers of mallards, pintail and teal, and even larger numbers of redhead, scaup and mergansers, plus smaller numbers of goldeneye and bufflehead. That was his best day duck-watching, and it was 20 years ago.

Declining duck populations may signal that something is wrong with the environment. The U.S. Fish and Wildlife Service has been monitoring breeding duck populations in North America since 1955. The last survey, done in 2019, showed a 6 percent decrease compared with the 2018 population. No survey was done in 2020 or 2021 due to the pandemic. The 2019 survey marks the first time since 2008 that the estimated breeding duck population has fallen below 40 million. Watching and documenting ducks as Stokie does then becomes important information for biologists.

It helps for beginning duck-watchers to understand the two types—dabblers and divers—and to focus on the colorful males. Dabblers, sometimes called puddle or marsh ducks, eat by dipping their head underwater to munch on vegetation and small insects in shallow areas. They’ll often point their rear ends to the sky as they forage for food. Dabblers usually have their legs placed near the center of the body and can walk fairly easily on land.

Diving ducks have a more compact body compared with the dabblers. Their legs are set farther back on the body and they have large feet which help them maneuver under water. Diving ducks run across the water’s surface to become airborne and their wings beat more rapidly than dabblers. They dive 10 feet or more below the surface to feast on fish, clams and vegetation.

Ducks often perform courtship displays in late fall into spring—which also adds to the excitement of watching them. For example, goldeneye males bend their heads back to their rear ends, then plow forward while kicking up water. Here’s a list of some of the more common dabbling and diving ducks. 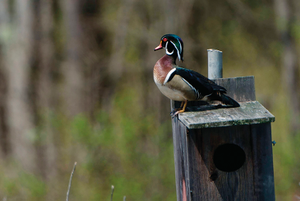 Mallard-The male has a shiny, green head, white ring around the neck, brown chest and blueish-purple wing patch. Mallards can be seen year-round in the region, but often in much larger numbers during migration.

Wood duck-The male has a purple-green-
crested head, red eyes and purplish-red chest. Among the most colorful of dabbling ducks, the wood duck leaves the Chicago area by mid-October and won’t return until next spring to breed. Wood ducks nearly became extinct in eastern North America due to habitat loss and over-hunting, according to Ducks Unlimited. Their numbers rebounded after the Migratory Bird Treaty Act was established in 1918.

Northern shoveler-A mallard-like bird with a huge, shovel-like bill and brown on its sides. The bill strains small critters out of the water and into its mouth. Northern shovelers remain in the region longer than wood ducks.

Common goldeneye-Common during migration and winter, the male has a green head with a white spot behind a gold eye.

Red-breasted merganser-One of the most common migrants and wintering duck species in the region, this duck can number in the thousands at certain times and locations. Males have a green head with a shaggy crest and long, thin, red bill.

For more on the dabbling and diving ducks of Illinois, visit Birdwatchinghq.com/ducks-in-illinois. 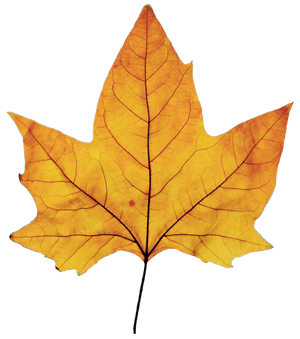 Photo by Artem Saranin from Pexels

How and where to watch ducks in fall in the Chicago area.

For diving ducks, visit large, deep lakes, including Lake Michigan. “Stand on the lakefront and look for large concentrations of ducks, then scan to see what different types of ducks are out there,” suggests Al Stokie, a long-time birder from Park Ridge. He also recommends William W. Powers State Recreation Area on Chicago’s far south side at the Illinois-Indiana border to see diving ducks such as mergansers, buffleheads and goldeneyes.

“You also can stand in one spot on the lakefront and watch the ducks come to you or fly by,” Stokie suggests. Near the yacht club at North Point Marina, in Winthrop Harbor, and nearby Spring Bluff Preserve, on the right day, he notes, “You may see hundreds, if not thousands, of ducks pass by.” Another place to search for ducks is at Heidecke Lake, in Grundy County. “The water stays open most winter and holds many diving ducks,” Stokie says.

“For inland duck watching, McGinnis Slough, in southwestern Cook County, is perhaps the best place in the Chicago area for non-diving ducks, with many being seen in migration,” Stokie says. “Nearby, Saganashkee Slough has deeper water, and so is better for diving ducks.”

Stokie also suggests the pond east of the Powers-Walker building at Glacial Park, in McHenry County, and the observation deck at Rollins Savanna, in Lake County, accessed from the Drury Lane parking area. A scope is available to use.

“Lake Renwick in Will County is a great place to watch geese and ducks in migration as long as the water remains open,” Stokie adds. “Both diving and non-diving ducks can be found here until the water freezes.”

Other spots farther afield include the Three Fires picnic area at Shabonna Lake State Recreation Area and Lone Point shelter along the Illinois River at Starved Rock State Park. For the best duck-watching experience, wear layered clothing and bring binoculars. Birdwatchers often offer to show duck species through their scopes that magnify the view to see all the colors and details.

It’s fun to watch ducks, but not a good idea to feed them, according to the Cornell Lab of Ornithology. Feeding ducks bread and other non-nutritious items could create digestive problems and vitamin deficiencies in the birds. Ducks need natural food to stoke up on the energy they need to fly south for winter. May is peak time for birdwatchers and nature lovers to hear and see about 30 species of warblers as they migrate through the Chicago region. Birdwatching is a fun, eco-friendly way to enjoy nature and get outside while staying at home. Read More »
In-Print, Green Living Migratory Birds Bird Watching Sheryl DeVore October 2021 Ducks