The public can now hike, attend events and volunteer at the preserve.

In 2004, Ed Collins wondered what it would take to create a national wildlife refuge in the midst of the highly populated Chicago region. “We needed to have a biological treasure, which we have,” says Collins, director of land preservation and natural resources for the McHenry County Conservation District. “We also needed a dedicated group of people willing to work on the refuge.” People did step up, dreaming big and working hard. They’re now celebrating the 10th anniversary of the establishment of the Hackmatack National Wildlife Refuge, located in McHenry County, Illinois and Walworth County, Wisconsin. “We have something very special here,” Collins says. “It’s an urban refuge. It’s within an hour’s drive of 12-13 million people centered between Rockford, Milwaukee and Chicago.” The public can now hike some of the refuge land, plus dozens to hundreds of volunteers attend workdays to restore the landscape. In addition, hundreds of visitors attend special events such as the annual Monarch Fair.

Collins, along with Steve Byers, a retired natural areas resources specialist for the Illinois Nature Preserves Commission, and Nancy Williamson, who retired from the Illinois Department of Natural Resources, serve as founding board members of the Friends of the Hackmatack National Wildlife Refuge. The group, with Byers serving as chair, was established to make the refuge become a reality, help it grow, educate the public and work in the field to restore habitats.

Hackmatack National Wildlife Refuge is not like most wildlife refuges that contain thousands of contiguous acres. “We realize we’re in an urban area where there may not be a huge chunk of land available at one time,” Williamson says, adding that the Friends visited Minnesota Valley National Wildlife Refuge, which was built with a similar concept, to learn ways to make their dream of a refuge in northern Illinois come true.

Instead, individual parcels of land will slowly be combined to form the refuge. Byers noted that will be a long process—one in which your grandchildren or great-grandchildren could become the refuge manager when it is completely stitched together. The Friends are part of a coalition of 12 land protection partner organizations that have pledged to work together to build the refuge.

Of the nearly 2,000 acres protected to date by that coalition, about 200 acres have now been conveyed to the U.S. Fish and Wildlife Service. Ultimately, the goal for the Service is to protect more than 11,000 acres of land in McHenry and Walworth counties. That land expands upon and complements the nearly 10,000 acres that have already protected by the McHenry County Conservation District, Illinois Department of Natural Resources, Wisconsin Department of Natural Resources and other private and governmental conservation groups. Byers relayed that Openlands, one of the 12 land protection partners, has been extremely helpful and a leader in acquiring land that will ultimately become part of the refuge.

“What’s really exciting,” says Collins, “is that the U.S. Fish and Wildlife Service has identified additional acres in the region that can be added to the refuge over the years when willing private landowners are ready to sell.” The fully proposed refuge includes four core areas connected by corridors creating a doughnut shape through Walworth and McHenry counties. Some corridors are part of existing conservation lands, such as Glacial Park, owned by the McHenry County Conservation District.

In time, some 20,000 acres of connected natural lands can serve as a self-sustaining ecosystem within the refuge and surrounding protected lands. “Politically, the wildlife service and conservation district and other landowners will remain separate entities,” Collins says. “But biologically, they work together.”

The refuge and surrounding private and conservation-owned lands provide habitat for some of the highest concentrations of endangered species and wetlands in the state, according to Collins. Bald eagles nest along waterways, river otters scurry in and out of creeks and wild turkeys roam the oak woods. Rare orchids grow in special habitats, while the federally threatened Blanding’s turtle uses an array of different types of wetlands throughout its life cycle. Plus, rare native mussels with interesting names like elktoe live in Nippersink Creek, a clean creek that flows through the heart of the refuge and other privately and conservation-owned properties. “It’s a beautiful stream,” Collins says. “It connects the natural areas biologically, and in an era of climate change, that is critical. Plants and animals have to have corridors in which to move.”

The landscape that comprises the refuge and other preserves in the Hackmatack region was shaped by ice and sculpted by fire. During the glacial age, ice sheets scoured the landscape until a new one rebounded from the weight of the ice. “As the glaciers retreated, they left lots of nooks and crannies and potholes and areas full of seeps and springs and cold-water fens,” Collins relays. “It’s a meeting place for a wide diversity of plants and animals.”

He notes that when the French came through this region in the 1600s, they described it as the most beautiful place they had seen since they were in Montreal. “The prairies were rich and verdant. The oak groves looked like apple orchards planted by the hand of God,” Collins says.

This ecosystem is rarer than rainforests, according to Collins. “It’s a national treasure,” he says. “Today, as habitat continues to shrink, the establishment of the refuge is an opportunity to build truly viable preserves that can stand for centuries.” A key part of this wildlife refuge is to provide public places for people to enjoy, as well as to manage lands to benefit native flora and fauna.

Pete Jackson, who has worked as a site manager on natural lands such as Deer Grove Forest Preserve, in Cook County, now serves as chair of the stewardship committee for the Friends of Hackmatack. He organizes workdays with volunteers to remove invasive species, conducts prescribed burns and performs other tasks crucial to help the ecosystems thrive.

“It’s pretty cool to have a wildlife refuge in the Chicago region,” Jackson says. “The way the refuge will fit into the fabric of the landscape of McHenry County is really fascinating to me. It’s like putting together pieces in a puzzle. You have conservation districts, land conservancies, the Illinois Department of Natural Resources, the Wisconsin Department of Natural Resources and private easements. All these land parcels are like a patchwork. Hackmatack comes along and starts to buy parcels and expands. It connects everything. I’ve watched this steady, but slow-paced progression of development of a wildlife refuge. It’s an amazing process.”

He realizes, too, “There is a ton of work to be done. Volunteers are so crucial. They work with various federal, state and local groups sharing time, equipment and resources. Conservation in the 21st century requires such partnerships,” Collins says.

Richmond-Burton High School students have worked on lands within and adjacent to the refuge property. “In two years, we put in 865 volunteer hours to clear a five-acre savanna,” Jackson says. “It was so gratifying. We talked about why oak savannas are important and why they are rare, how buckthorn (a non-native species) creates too much shade for the oaks to regenerate.” 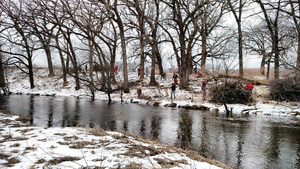 Jackson says he’ll never forget the cold, windy January day when the students came out to spread seeds throughout the cleared savanna. “Nine kids braved this cold day,” he recalls. “I gave them a bucket and some savanna seed mix. We lined up shoulder-to-shoulder. We marched straight through the savanna, tossing seed.” In a few years, plants such as goldenrod, shooting star and aster will be blooming in the restored savanna, which eventually will be owned by U.S. Fish and Wildlife Service, according to Jackson.

Workers also are tackling the garlic mustard at another parcel of the refuge open to the public, known as Blackmon Tract. “It’s just south of downtown Richmond, adjacent to the Prairie Bike Trail, part of the Grand Illinois Trail,” Williamson says. “There’s an entrance sign to the refuge, a picnic table and a hiking trail that takes people out to a higher point of ground that overlooks a wetland basin.” Student and adult volunteers have done restoration days and helped remove debris from the wetland. “There were layers of things that had been dumped alongside of the marsh,” Williamson says.

As he considers the dream of the refuge and the people working to make it happen, Collins says, “It’s no wonder this part of the world is called the heartland. The land and people are joined together at the heart. That’s Hackmatack. And the wildlife refuge will only do good for the region. Studies show people like to live where there are good schools and lots of public open space.” May is peak time for birdwatchers and nature lovers to hear and see about 30 species of warblers as they migrate through the Chicago region. Birdwatching is a fun, eco-friendly way to enjoy nature and get outside while staying at home. Read More »
In-Print, Green Living Nature July 2022