After a summer of nesting, hummingbirds are wending their way south to spend winter in Mexico and Central America. Some Chicago area nature lovers see hummingbirds all summer, but in August and September, there’s the chance to see more as they pass through on their way south for the winter.

Hummingbirds seem magical because of their incredible abilities. For example, they can beat their wings up to 100 times per second, according to Vernon Kleen, founder and director of the Lincoln Land Bird Banding Station, and a retired ornithologist with the Illinois Department of Natural Resources. “Because of their unique wing structure, hummingbirds are the only bird species that can hover and fly backward in still air,” Kleen says. “Their wings rotate in a figure-eight motion to gain upward thrust on both the up and down stroke.” Hummingbird hearts can beat about 1,200 times per minute. Ruby-throated hummingbird is the most common hummingbird species in the Chicago area and throughout Illinois. Males and females show iridescent green on their backs and white on their fronts. Only the males have the ruby red throat, and that can only be seen when the light hits the feathers a certain way. “Females and young birds of the year are not usually distinguishable in the field,” Kleen says. “However, an occasional young male may have one or more bright-red gorget [throat] feathers.”

In spring, ruby-throated hummingbirds fly non-stop across the Gulf of Mexico. “It takes 15 to 20 hours to make the 500-mile trip,” Kleen says. “On their return trip, they either cross the Gulf or follow the Texas coast back to Mexico.” Just before they begin migrating, their body weight increases from about three grams to nearly five grams, about the weight of a nickel, Kleen says.

Those seeing hummingbirds at their feeders and plantings all summer can almost be assured that the species is nesting nearby. Ruby-throated hummingbirds arrive from the south in about late April in the Chicago area; some continue north to breed, others stay here to breed.

The nest, built by the female, is about the size of a half dollar and resembles a knot on a limb. “It consists of small plant fibers and bud scales, is lined on the outside with lichens and held together with spider webs,” Kleen says. The female lays two peanut-sized white eggs, which she incubates for 14 to 16 days. “The newly hatched young then have about two to three weeks of nest life,” he notes.

A hummingbird burns thousands of calories each day. Kleen says, “If humans were required to consume food in the same proportion as hummingbirds, they would have to eat 250 or more quarter-pound hamburgers every day.” 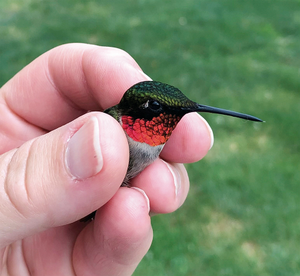 Kleen, who will present a hummingbird banding program on August 20 at the Sagawau Environmental Learning Center, in Lemont, says banding does not harm the birds and can only be done by those with a special license. Only two people have a license to band hummingbirds in Illinois, and he’s one of them. “By banding hummingbirds, we can learn a lot about their migration,” Kleen says. “For example, we now know there’s a fantastic return rate to their nesting homes compared with other birds.”

Attracting Hummers to the Yard

Planning landscapes to attract these birds, as well as hanging special feeders through summer and fall, affords a good chance to see one. In Pam Karlson’s Chicago garden, ruby-
throats start appearing about May first to visit the many long, tubular flowers she grows using no insecticides or herbicides, because hummingbirds also eat insects, which provide essential protein. “They are expert fly-catchers,” Karlson says. “It’s a blast to watch their acrobatics while they feed on tiny insects in the air. Plus, it’s natural insect control.”

Insects make up about one-third of a hummingbird’s diet, and they also need nectar. “I target early spring to late fall bloomers, providing nectar plants for them that stretch throughout the entire growing season,” Karlson says. “I also put together planters with annuals that attract hummingbirds to extend the season. In late fall, when frosts begin, I bring some of the smaller annual pots inside our unheated garage at night to protect them from frost. In the morning when the temps rise, I put them back out for the hummers to feed on.”

In spring, hummingbirds feed on native perennials such as wild columbine, Virginia bluebells, penstemon and the flowers of serviceberry and wild back cherry trees. In summer, Karlson grows annuals like fuchsia and salvia, which attract hummingbirds. They also visit impatiens, petunias and zinnias in summer.

In autumn, hummingbirds visit perennial natives such as cardinal flower, blue lobelia, trumpet vine, blazing star and jewelweed. Where there are large patches of jewelweed in the wild, hummingbirds hover to sip the nectar of this native plant that blooms in late summer. “It is normal for us to continue to get hummingbirds in our garden well into or through the end of October,” Karlson says. “The latest sighting of a hummingbird I’ve ever documented in our garden was November 11.” 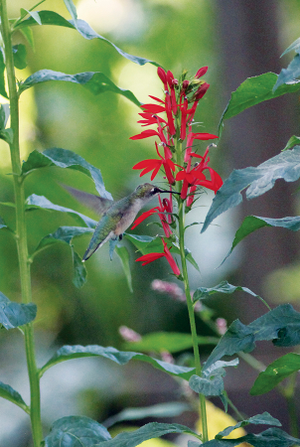 Karlson says she also provides nectar feeders for hummingbirds. “I have three stations. I hang them starting May first and keep them up through the end of November,” she says. “I choose shadier locations to hang the feeders to help prevent spoilage. I use plain old white cane/table sugar—one part sugar to four parts water. Plain sugar is really the only kind to be used,” she says. “Avoid organic, brown or honey—the iron content is too high and can damage their organs.” Kleen says that during migration, the ratio of sugar to water used could be one-to-two, providing more energy for the migrants.

Karlson washes and changes her feeders every one to three days. She hangs three stations in different parts of the garden to help quell disputes. “Hummers can be quite protective of their food sources and get into battles over them,” she says.

Kleen agrees. “Hummingbirds are a ‘Me-first’ species. When they find a food source, no matter how extensive, they protect it for themselves, driving all potential food competitors away,” he explains. “They know how long each flower takes to regenerate the nectar, and growing up with flowers (not feeders) they’ve maintained that Me-first behavior, even at feeders.”

Those that feed hummingbirds often wonder when to take their feeders down. “In the past, people believed hummingbird feeders should be taken down in September so the birds would not be lured into staying beyond normal departure date,” Kleen says. “However, we’ve learned that’s not true. Feeders are not responsible for delaying migration. Hummingbirds, like other migratory avian species, take inner [and outer] cues such as change in hormones and amount of daylight to know when to migrate.” He encourages people to leave feeders out at least two weeks beyond the date the last hummingbird was seen, or even until November or December.

“The presence of such feeders late in the season has attracted and assisted the survival of many strays, including unexpected species from the West and Southwest,” Kleen says. Rufous hummingbird is a rare visitor to Illinois, including the Chicago region, in fall. Photo credit U.S. Fish and Wildlife Service/Photo.

Rare Hummingbirds Can Be Seen, as Well

One of these is the rufous hummingbird, which was first documented in Illinois in 1993; one in Olympia Fields and another in Murphysboro. Since then, it’s been regularly seen nearly every year in fall in different parts of the state, Kleen says. More recent examples include one in Oak Park that visited a backyard feeder from November 21, 2001, to January 6, 2002, and another seen during the first few weeks of December 2020, in Lisle, in DuPage County.

Males have orange-red throats, while females have white, speckled throats and rufous [reddish brown] on their white-tipped tail feathers. Several other even rarer hummingbird species for the state have been documented in Illinois, including Allen’s, broad-billed and Anna’s. In 2021, a Mexican violetear, typically found south of the border, visited a hummingbird feeder in Mundelein, in Lake County, for several days. Karlson says she’s never had a rare hummingbird in her garden, but this fall, as usual, she’ll be looking and hoping. 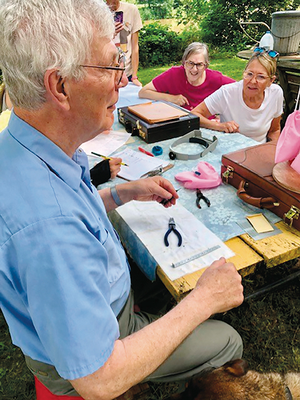 Vernon Kleen, licensed hummingbird bander in Illinois, fits a band on a bird during one of the programs he gives throughout the state in summer and fall. Photo credit Nancy Redman

The Will County Audubon Society and the Forest Preserves of Cook County are co-sponsoring a free hummingbird festival from 9 a.m. to 2 p.m., August 20, at Sagawau Environmental Learning Center, in Lemont.

Licensed hummingbird bander Vernon Kleen will capture and band hummingbirds between 9 a.m. and 12:30 p.m. following strict regulations established by the North American Banding Council to ensure their safety. Some participants will be able to hold and release the hummingbirds. For more information, visit fpdcc.com/event/hummingbird-fest. May is peak time for birdwatchers and nature lovers to hear and see about 30 species of warblers as they migrate through the Chicago region. Birdwatching is a fun, eco-friendly way to enjoy nature and get outside while staying at home. Read More »
In-Print, Green Living August 2022 Hummingbirds