Two adults canoe on one of Openlands 10 designated water trails in the region. Photo by Liina Raud.

When Michael Taylor first paddled his kayak down the Calumet River, he saw turtles and an egret. He also saw junk and debris. “I thought we needed to do something to clean up the river,” recalls Taylor, of Richton Park, an Illinois Paddling Council board member, kayak instructor and volunteer water trail keeper.

Taylor had that experience decades ago. Today, thanks to him and other individuals, as well as nonprofit organizations including the paddling council, Openlands and Friends of the Chicago River, villages and local forest preserve districts, the Chicago region waterways are cleaner. New boat launches have been created so residents have better access to canoe and kayak on 10 established water trails in Cook, DuPage, Kendall, Lake, McHenry and Will counties. Openlands has created an online comprehensive guide for canoeing and kayaking 500 miles of these trails in northeastern Illinois, offering information on renting boats, taking lessons and learning about the waterways.

“Openlands is concerned with being able to connect people with nature where they live,” Barghusen explains. “We are giving people opportunities for high-quality recreation where they live. There’s a whole educational component to it, as well. It can connect people not only to the aquatic ecosystem, but also the history of the area, because a lot of the waterways have rich history associated with them,” she says. “People can get on the water, enjoy the water, feel connected to it and advocate for it.”

That’s what Taylor did years ago when he traded in his power boat for a kayak. He admits, “When you’re in a power boat, you’re having fun with friends, going as fast as a boat can go. You don’t see anything other than the water. You don’t see nature.” But when he got into a kayak and saw junk floating down the river, he realized what was more important. “When you’re in a kayak, you are actually in nature. You’re much more connected to nature. You see the turtles, the egrets, the birds, the deer, stuff you never saw before from a new perspective.”

Taylor helped form the Calumet River Club to do cleanups and reached out to Openlands to get involved with the water trails project. Now there are yearly river cleanups on various waterways, plus canoe and kayak instruction at some locations on the water trails.

Taylor serves as steward for the Little Calumet River. For example, “When trees are downed across the river they create what’s called a strainer, and that’s very dangerous for paddlers,” he says. “If you want to have a water trail, you have to keep it open.” He lets the appropriate officials know about the issue.

Taylor says since the establishment of the water trails project, “The Little Calumet is definitely cleaner than before. Still, every year people throw stuff in it. We have to raise awareness. This is a dynamic, living river, not an open sewer.”

Barghusen says new launches have been installed since the adoption of the Northeastern Illinois Regional Water Trail Plan; for example, the Forest Preserve District of DuPage County received a grant to improve a launch site at Cricket Creek Preserve on Salt Creek. Calumet City put in a new launch site at Riverfront Park on the Little Calumet River. At 26th Street Woods, the Forest Preserves of Cook County designed a natural bank as a new launch site on Salt Creek. The forest preserve also established a launch site in Maywood on the Des Plaines River, where community leaders can use paddles and boats from a gear library and learn to paddle and take people on trips. Taylor says these new launches show, “Many more communities are conscious of the valuable asset—the diamond in the rough they have in their backyard.”

Taylor says finding a place to rent a boat on Chicago’s south side remains difficult. His favorite water trail is along Lake Michigan, but that’s not for beginners, he says. Instead, Openlands and other groups offer programs along calmer waterways. When Taylor takes beginning paddlers down some of the waterways that snake through communities, he says they’re astonished. They get the sense they are in Wisconsin, not in the urban environment where they live.

Openlands has offered programs in large canoes that carry eight to 10 people and are great for beginners, as well as those that don’t have the strength to continue to paddle non-stop. “People are really excited to get on the water,” says Barghusen. “A lot of times, they’ve never been on the water before, even if they live near the waterway.” One participant in a water trip on a lagoon at Garfield Park told her he lived near the park for years, but it was the first time he got on the water. “He said it gave him a whole new perspective,” Barghusen recalls.

As more people took to the waterways in the region, agencies that regulate water quality standards noticed. “Officials did a use-attainability analysis of the Chicago River system and decided to work to raise higher water quality standards,” Barghusen says. “One of the things that really helped with the decision was the fact that so many people were canoeing and kayaking in it. That really contributed to the decision to disinfect wastewater before it was released into the river.”

Openlands also is working to educate community members about their towns’ history through paddling excursions. Openlands Education and Community Outreach Coordinator Lillian Holden helped create the African American Heritage Water Trail along the Calumet River. “We created an intersection between the Calumet River and its relevant history in the Riverdale area, which is predominantly African American,” says Holden.

Participants are guided in boats through 180 years of history from the Underground Railroad to the Tuskegee Airmen, a group of African Americans that assisted during World War II even though they had a difficult time being recruited and accepted. “Participants not only become familiar with recreational canoeing and kayaking, but they also become more familiar with things that could connect to their heritage,” she says.  Folks can take guided trips or go on their own if they are already expert paddlers. 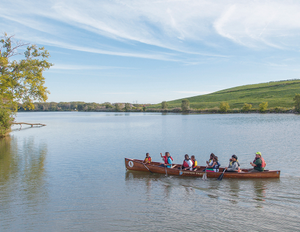 Openlands and several partners recently started an internship program teaching teens and young adults about the heritage water trail, offering them canoe and kayak lessons and ways to teach others as they go down the waterway. “Some of them were a bit shy,” Holden says. “This was out of their comfort zone.” But now they are ready to take people out into the water and teach them how to paddle.

When she is on the water, Holden says she feels an expansiveness and openness. “It’s not like running or biking on land, Being in the water is therapeutic. That’s what people have said. Getting more people out on the water is what we want.” May is peak time for birdwatchers and nature lovers to hear and see about 30 species of warblers as they migrate through the Chicago region. Birdwatching is a fun, eco-friendly way to enjoy nature and get outside while staying at home. Read More »
In-Print, Green Living Chicago River Canoeing September 2022 Kayaking