Walking in an oak woodland brings Jen Berlinghof to a sacred place. “There’s a feeling that it’s different, that it’s special, especially in the fall,” says Berlinghof, an environmental educator for the Lake County Forest Preserves. “There’s a feeling like you’re in a place of greater magnitude. It’s vibrating with all the different life that’s around.”

Even as fall signals the end of summer and beginning of winter, those that look carefully can find an array of life from colorful mushrooms to oak apple galls and the changing hues of leaves in the October oak woodlands. They can also hear their feet crunching on acorns fallen on the forest floor, as well as squirrels munching them in the trees. Common oaks in the region include white, bur and red.

Depending on weather conditions, oak leaves are losing their chlorophyll pigments in October, revealing hidden hues of russet and brown. Last year, Berlinghof notes oak leaves were particularly stunning. “You get the best fall colors when you have these crisp days with clear, sunny skies and cool temperatures at night,” she says. “An adequate amount of rainfall, but not too much storminess, produces the best colors.”

Berlinghof notes, “Oaks, unlike other deciduous trees, retain their leaves long into winter.” So even in late October, when leaves have fallen off most deciduous trees, oak leaves are still hanging on, giving the woodlands an unusual look. In October, Brett Peto, an environmental communication specialist with the Lake County Forest Preserves, enjoys watching squirrels and chipmunks scurrying around and preparing for winter. “I just like the high energy level, all the activity they’re going through to prepare for the slow season, especially chipmunks, when you see their cheeks are full and wonder how many acorns they have in their mouths,” Peto explains. Chipmunks and squirrels are caching acorns to retrieve in winter. Squirrels are also making their winter dreys, or nests, of oak leaves to keep warm in on cold, snowy days.

Bernd Heinrich, author of Winter World, wrote of a squirrel drey he found that contained 26 layers of dry, flat oak leaves atop a layer of shredded bark. The inner layers were dry, despite a heavy rain the day Heinrich found the drey.

Squirrels are not only building winter homes in oak woods, but also helping plant new oaks by burying acorns. Humans are helping plant new oaks, too, by opening up the canopy in the deciduous oak woodlands and allowing more sunlight to reach the ground, which encourages oak trees to grow. Oak regeneration projects like these can be found throughout the Chicago area.

“Species like red-headed woodpeckers are definitely increasing as we open up the woods,” Berlinghof says. They forage in open oak wood habitats, flying to grab an insect in summer and gleaning acorns from oaks in fall and winter. The woodpeckers have a solid, bright red head, face and neck, and dark black back with two contrasting white panels, which stands out in an autumn woods. Berlinghof says hikers can see red-headed woodpeckers on an October walk in Ryerson Woods, Wright Woods and other oak woodlands in Lake County. Some may remain over winter if enough food exists, while others make short movements southward looking for dinner.

In October, Peto searches for mushrooms, the fruiting bodies of fungi, in oak woods. “Fungi are interesting. They’re neither plants nor animals,” he says. “They’re always growing underground, mostly out of sight from human eyes. They produce more mushrooms in fall with wet, humid weather. That’s why people relate fall and fungi together, when their fruiting bodies are up above the forest floor. Each mushroom can release billions of spores, which are analogous to seeds.”

One of his favorites and an easy one to find is the giant puff ball. “They are visible from about late May to mid-July, and then again in October,” Peto says. “They grow singly or in what are called fairy rings” Last October at Ryerson Woods, in Deerfield, Peto found a cluster of puffballs. One was as large as a soccer ball, another as large as a basketball. “We see puffballs regularly here at Ryerson Woods and Daniel Wright Woods, and all along the southern Des Plaines River, where there are large swaths of oak woodlands,” Peto says. “If you poke a puffball when it’s mature, it will release a puff of spores like a wisp of smoke. Wind and ran can do that, too.” 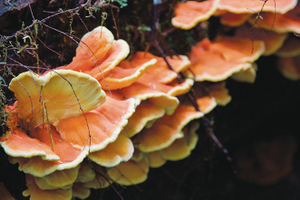 Another common oak woodland mushroom is chicken-of-the-woods. “It’s a shelf, or bracket fungus,” Peto says. “It tends to grow in multiple layers. It can be on many deciduous trees, including oaks, beeches, plums and willows.” The fruiting body is bright orange and yellow. Chicken-of-the-woods can be visible into November, adding color to a dreary day. It likely got its common name from the fact that it’s meaty, or perhaps it tastes like chicken, Berlinghof says. “Though chicken-of-the-woods are not poisonous, no one should be harvesting them from the forest preserves,” Peto cautions. “Poaching and foraging are illegal.” Plus, many mushrooms are poisonous and require an expert to identify them.

One mushroom that’s more difficult to spot is hen-of-the-woods. “It has earthy brown tones, and sometimes people mistake it for fallen leaves,” Peto says. “You’ll find them in oak woodlands September through November.” Another more cryptic find in the oak forest is the oak apple gall. It looks like a tiny green apple hanging on the stems of oak leaves. “A gall is formed when a female wasp injects an egg into the leaf, often with a chemical that sets off a reaction for the lump, or apple, to form,” Berlinghof explains. “Inside the gall, the egg hatches, then the larva goes through different stages, eats all the plant matter created by the gall and then transforms into an adult wasp and chews out a little hole to escape. In October, apple galls dry and turn brownish, remaining on the leaves or falling to the ground.

Isabella moth caterpillars also roam the forest floor in October. “These are big, fat, spiky caterpillars we call woolly bears,” Berlinghof says. “I always see them in October while walking the trails at Ryerson Woods.” They are cold-blooded animals, and on a warm day in October, they are on their last round of feeding on plant material to bulk up before going underneath the leaf litter to spend winter. Folks often say the more black color seen on a woolly bear, the harsher the winter will be, but woolly bear caterpillars cannot predict the severity of winter any better than groundhogs can predict when spring will arrive. “As the caterpillar molts, a stripe of black hairs is replaced by orange russet hairs,” Berlinghof says. “The more orange bands, the older the caterpillar, but that doesn’t mean winter will be less severe.”

Be careful when viewing caterpillars in October. “Some have telltale spiky hairs and bristles for protection,” Berlinghof says. “You don’t really want to pick them up. They can cause skin irritation. If a raccoon were to grab it, it would spit it out. Sometimes these caterpillars will curl up in a ball with all the spikes sticking outside.”

We can also see amphibians and reptiles in October woods. At the Palos Preserves, in Cook County, Berlinghof and her son found various reptiles and amphibians last fall, including the blue-spotted salamander. “In October, they go down into the leaf litter and under logs or at the bottom of pond for the winter,” Berlinghof says.

“Oaks are keystone species,” Berlinghof says. “They are an important part of the biodiversity of the woodland ecosystem, and exploring them in October gives you a chance to experience that biodiversity.”

Oak Woodlands to Visit in October May is peak time for birdwatchers and nature lovers to hear and see about 30 species of warblers as they migrate through the Chicago region. Birdwatching is a fun, eco-friendly way to enjoy nature and get outside while staying at home. Read More »
In-Print, Green Living Nature trees October 2022