Time May Be Running Out For Native Trees Ash tree species that grow in the Chicago region are at risk of extinction. Photo courtesy The Morton Arboretum.

At least 94 of 881 native tree species in the lower 48 states are threatened with extinction. Of those, 10, including five species of ashes, are growing in Illinois, most of them in the Chicago region, according to a first–of–its-kind collaborative five-year study. It reveals that an estimated 11 to 16 percent of tree species in the contiguous United States are globally threatened, and that has local scientists concerned.
“Tree species diversity is really important,” says Lydia Scott, director of the Chicago Region Trees Initiative (CRTI), administered by the Morton Arboretum. “We just lost 10 million ash trees in the Chicago region in the seven-county metro area. We need to expand species diversity so we don’t experience these catastrophic losses.”
A report based on the five-year study says the main threats to these species are invasive pests and diseases, along with climate change and habitat degradation.
“Planting a diversity of trees is a way to make our urban forests more resilient to pests and diseases,” says Murphy Westwood, Ph.D., vice president of science and conservation at the Morton Arboretum and senior writer for the report.
Loss of tree species also impacts other organisms. Forests hold 80 percent of all the world’s amphibian species and 75 percent of the world’s bird species. “Trees offer food and habitat for countless plants, animal and fungal species while providing invaluable benefits to humans,” Westwood says. “Understanding the current state of trees within the U.S. is imperative to protecting those species, their habitats and the countless communities they support. Planting a diversity of trees is one way to make our urban forests more resilient to pests and diseases.”
Partners including Morton Arboretum, Botanic Gardens Conservation International US, Inc. and NatureServe began the study in 2017 to determine globally threatened tree species growing in the U.S. and to create an updated checklist of all the nation’s native tree species.
“We were already working to assess all of the world’s oak species for their risk of extinction,” Westwood explains. “We realized that only a handful of our native tree species in the Lower 48 states had been assessed for their risk of extinction.” The International Union for Conservation of Nature (IUCN) maintains a red list of all species in the world threatened with extinction. Specific protocols must be followed before a species gets placed on the red list.

Working on the study of native trees in the U.S. required many hours of reviewing literature, examining specimens in herbariums and interviewing hundreds of botanists and ecologists. “Now for the first time, we have a comprehensive understanding of how many tree species we have in the U.S., how threatened they are and why,” Westwood says. “One way to determine if one of those species is threatened is if you have a very rapid rate of population decline,” she adds.

For example, the emerald ash borer, native to Asia, arrived in the U.S. in the 1990s and was first detected in Illinois in 2006. “It is killing nearly all the mature standing ash trees,” Westwood says. “That is such a rapid decline. It’s enough to put the species at risk of extinction. It has been just devastating. It’s in 35 states and continues to creep across the country. There must be trillions of emerald ash borers out there. We’ll probably never eradicate them.”
Municipalities have treated ash trees to protect them from ash borer, but that’s not what will keep these tree species from going extinct. “The solution will need to be a combination of tactics, including early monitoring and detection for the borer, biological control of the pest and researching what are known as lingering ash trees,” Westwood says. “Every now and then you see a tree here or there that survives longer than all the others,” she explains. “We call those lingering trees that have not been treated for ash borer, and yet are still surviving.”
The Morton Arboretum is collaborating on this research and breeding program of the lingering trees to understand the mechanisms that make them resistant to ash borer. Researchers are doing similar work with the American elm, which is also on the global tree species list threatened with extinction. Researchers are developing and planting cultivars that are resistant to Dutch elm disease.
“The elm and ash here were planted en masse in neighborhood streets,” Westwood explains. “So when the pests came through, they could easily move from one tree to the next. At one time, we had elms across our neighborhoods.” Along came the Dutch elm disease from Asia, which wiped out most of the U.S. elms. “We replanted neighborhoods with ash species,” Westwood says. “Now all of our ash are dying. That’s why planting a variety of tree species is important.” 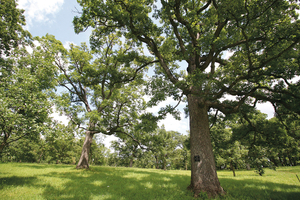 Another big message from this study is to continue work on loss of oak trees, Scott says. No oak tree species that grows in Illinois is on the IUCN red list of species threatened with extinction. “But while they’re not threatened with extinction right now, our oaks are declining,” Scott says. “It’s not just species diversity we’re worried about, it’s also about age diversity. We know that the majority of our oaks [in the Chicago region] are 18 inches or larger in circumference. We’re not seeing smaller ones to replace the older oaks.” Land managers in the region have been working on an oak regeneration projects for several years. “The Arboretum is helping to coordinate this effort and is actively conducting research to understand the complex causes of oak decline in our region,” Scott says.

The CRTI and its partners are also providing education and outreach to municipalities and individuals to learn which trees to plant and ways to plant and care for them. “CRTI teaches people how to plant a tree, about watering and mulching and caring for their trees,” Scott says. “We offer training to municipal staff on forestry practices. We work with the Illinois Department of Natural Resources to administer grants to communities across the state of Illinois to help them develop ordinances that preserve and protect the trees they have.”
For the past several years, the Arboretum and local partners also have been working on inspiring people to value trees. “We need them to understand why they should care, to understand that increasing the tree canopy reduces stress to an ecosystem,” Scott says.
Westwood says what’s done here to protect trees and tree diversity in the Chicago region can have far-ranging effects. “Some of the actions we can take can be very immediate and personal. Planting a tree in your front yard can help a threatened tree in California. You’re creating a cooling effect. You can help mitigate storm water. You can create habitat for insects and birds and pollinators. That one tree can have a positive impact on climate change. We know that climate change is one of the biggest threats to trees. If everybody plants more trees and supports native ecosystems, it can have an additive effect. We can push toward a better environment.”
Sheryl DeVore has written six books on science, health and nature, as well as nature, health and environment stories for national and regional publications. Read more at SherylDeVore.wordpress.com. 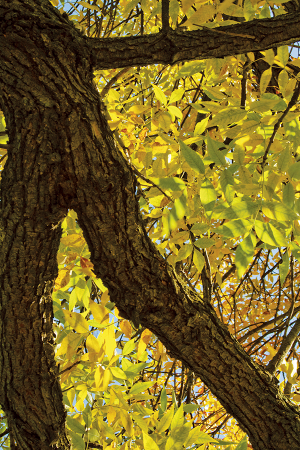 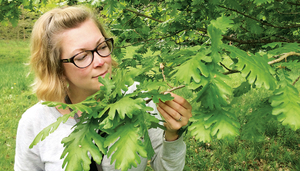 What We Can Do

Plant different species of trees in your yard. See what’s growing in your neighborhood and try something different. Spring and fall are the best times to plant trees when the soil is not frozen. Visit MortonArb.org/blog/how-to-plant-a-tree
Choose a tree that’s recommended by Morton Arboretum’s plant clinic for your site. Visit MortonArb.org/plant-and-protect/expert-advice
Join TreeKeepers to help care for the urban forest in the Chicago region. Visit Openlands.org/what-wedo/trees/treekeepers
Get a tree planted in a Chicago neighborhood. Visit Chicago.gov/city/en/sites/our-roots-chicago/home.html May is peak time for birdwatchers and nature lovers to hear and see about 30 species of warblers as they migrate through the Chicago region. Birdwatching is a fun, eco-friendly way to enjoy nature and get outside while staying at home. Read More »
In-Print, Green Living trees November 2022