A Field Museum community scientist project may help determine if gardens like the one Judith Rice tends in her Skokie yard provide what monarch butterflies need to thrive. In two years of participation, she’s documented the iconic black-and-orange butterfly’s eggs and caterpillars munching on milkweed leaves in her yard. She’s also given away milkweeds to family and friends to grow in their yards.

“I had been reading about the decline in the population of monarchs,” Rice says. “I thought it was cool The Field Museum had this community science project. I feel like I’m doing something for the environment. Monarchs are just so fascinating. If what I’m doing helps increase their population, that makes me happy.”

Monarchs require nutrition during migration, as well as places to lay their eggs to keep the species thriving. That means they need blooming plants with nectar to provide them energy as well as milkweed, the specific plant upon which their young will feed as they grow and become adults.

“We are working to understand what a successful urban monarch butterfly garden looks like,” says Erika Hasle, a conservation ecologist with The Field Museum. She is guiding the community science monarch project, now in its third year. Last summer, Rice and 178 other volunteers in Chicago, the northern and southern suburbs and parts of Indiana documented the number of monarch eggs and caterpillars found in their gardens and the number of milkweed stems in their yards. Anyone with a milkweed plant can participate. It doesn’t matter if it’s on a balcony, rooftop, in a huge garden or small garden. All the data gathered is helpful. 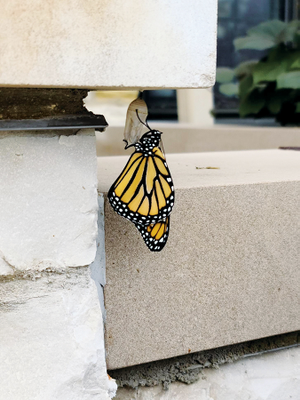 Monarch adult after emerging from chrysalis. Photo by Vincent Willas

“The eastern population has declined by about 80 percent,” she continues. “Recent modeling shows that under current conditions, eastern monarch populations could experience significant declines in the next 20 years. However, there is still time to reverse the tide.”

The U.S. Fish and Wildlife Service declined to list the monarch as an endangered species in December, but is still considering that action, according to Hasle. Meanwhile, legislation has been introduced in Congress to appropriate funding for monarch conservation.

Many reasons exist for the decline of the monarchs, including climate change, use of pesticides and loss of habitat in its wintering and summer grounds. Monarchs have lost an estimated 165 million acres of breeding habitat in the United States to herbicide spraying and development in recent decades, according to the Center for Biological Diversity. The caterpillars eat only milkweed, but the plant has been devastated by increased herbicide spraying. In addition, neonicotinoid insecticides, fungicides and other chemicals are toxic to young caterpillars. according to the center.

Reintroducing milkweed in the urban landscape and avoiding the use of pesticides can help, according to Hasle. “In order to stabilize the eastern population, we need 1.8 billion stems of milkweed added to the eastern landscape,” she says. 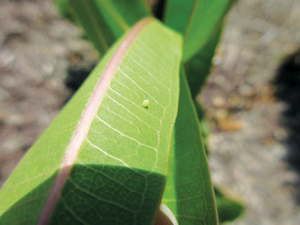 Monarch egg on milkweed at the Field Museum. Photo by Urusla Avarado-Miller.

Even with just two years of gathering data, The Field Museum project is revealing some preliminary information. One is that “common milkweed is definitely a powerhouse for monarch reproduction,” Hasle says. Many types of milkweeds grow in the region, including butterfly weed and swamp or rose milkweed, which also attract monarchs to lay eggs, she says. They’ll continue to monitor which milkweeds best suit the monarch.

The group is also studying what other plants in urban and suburban landscapes help monarchs. “The kinds of plants and the shape of the garden, even where the milkweed is located, could be important to the monarch,” Hasle explains.

Judith Rice’s Skokie yard not only contains milkweeds, but also native plants such as cardinal flower, blazing star, purple coneflower, bee balm and black-eyed Susan. She also plants annuals, including zinnias, which offer nectar to monarchs. as well as to other insects. 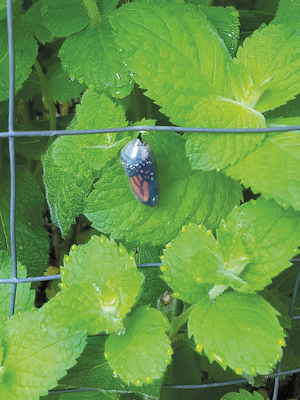 Monarch chrysalis ready to emerge as an adult in Chicago region. Photo by Janelle Kheshgi

She monitors weekly—counting eggs, caterpillars and the number of milkweed stems from about the beginning of June to the beginning of September—peak time for monarchs to be laying eggs before journeying south to Mexico. In her second year, while standing quietly in her garden, she observed a monarch lay an egg on a milkweed. Now she knows how to find the eggs and watch for them to hatch into caterpillars that grow quickly before entering the pupa stage, in which they form a chrysalis. “I never realized all the life in your garden,” she says. “It’s amazing. You hunt for eggs, then you hunt for the instars—which are the stages of the caterpillar as it grows. Last year, I had so many eggs, but not nearly as many instars.”

“Variable climates each season can affect the number of eggs laid and caterpillars that reach adulthood,” Hasle says. “A monarch female lays about 300 eggs in her lifetime. Fewer than 10 percent of eggs survive to adulthood.”

Volunteers for The Field Museum project are learning how their work connects with what’s being done in Mexico to conserve the monarch. Eduardo Rendon Salina, head of the World Wildlife Fund Mexico Monarch Butterfly Program, recently spoke to the volunteers, saying, “The most important step in animal conservation is that you are producing the habitat. ”

Growing milkweeds in the United States and establishing nectaring gardens throughout the monarch’s migration pathway, including in Mexico, will help, he says. In addition, a protected area has been set aside in Mexico where the monarchs overwinter.

Hasle says she’s happy about the connection between Mexico and the United States when it comes to conserving monarchs. Here in Chicago, she says, “The Field Museum project is such a clear representation of something an individual can do to help monarchs.” 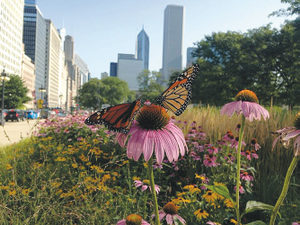 Anyone with a milkweed plant in their yard can monitor monarchs through the Field Museum project. The museum also will supply one free milkweed plant to individuals this spring. Monitors attend a training session, then complete a survey about their garden and commit to monitoring their plants weekly from late May to early September, entering data on a website. Monitoring also can be done at local parks, schools and churches. Free training sessions are offered online May 12, 15, 19 and 27. To register and learn more, visit Tinyurl.com/FieldMonarchTraining. One of the most exciting things for raptor lovers to see in early spring is the courtship flight display of the red-tailed hawk and watching and listening to American woodcocks court in short, wet grasses next to woodlands and shrublands. Writer Sheryl DeVore explores how these spring bird behaviors help us to connect to nature in the Chicago area. Read More » May is peak time for birdwatchers and nature lovers to hear and see about 30 species of warblers as they migrate through the Chicago region. Birdwatching is a fun, eco-friendly way to enjoy nature and get outside while staying at home. Read More »
In-Print, Green Living Climate Change Butterflies Monarch Butterfly The Field Museum Mexico Gardens May 2021 Milkweed Judith Rice Erika Hasle Eduardo Rendon Salina Animal Conservation