Turtles have lived on Earth since the dinosaur era, some 60 million years ago. But today, these reptiles with hard shells and soft bodies need help, and they are getting it from groups throughout the Chicago region. The Peggy Notebaert Nature Museum, Brookfield Zoo, Lincoln Park Zoo and forest preserve and conservation districts in McHenry, Lake, Will and DuPage counties, among other entities, are raising and releasing the state-endangered Blanding’s turtle into the wild.

Meanwhile, the Forest Preserve District of Cook County and Friends of the Chicago River are tracking commonly found painted and snapping turtles to see if restoring nature gives them a better chance at survival. “Turtles are a unique part of our natural heritage,” says Gary Glowacki, a wildlife biologist at the Lake County Forest Preserve District. “They are an important member of the ecosystem and the food chain. They have been around for a long time. They serve as both predator and a food source for other animals.”

Because they cannot regulate their body temperature like mammals, turtles sun themselves atop logs and rocks in and around bodies of water. Among the most common native turtles seen in the region are painted turtles and snapping turtles. Other natives include the spiny softshell turtle, which has more specific habitat requirements, such as larger bodies of water.

Red-eared sliders can be common in some Chicago regions, too. “But historically, they did not occur north of the Kankakee River,” says Michael Dreslik, a biologist specializing in reptiles at the Illinois Natural History Survey. “Likely a combination of range expansion, pet releases and their generalist habit have allowed them to become ubiquitous.” Red-eared sliders can become invasive in some parts of the country by competing with native turtle species for food, habitat and other resources, according to the Invasive Species Initiative. 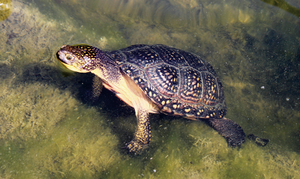 The Lake County Forest Preserve District has been monitoring populations of turtle species since 2008, and the numbers are fairly stable. But Glowacki says if monitoring had begun many decades ago before the region was developed, declines certainly would have been recorded.

The turtles’ biggest enemies today are vehicles and predators, especially raccoons. Female turtles travel long distances to lay eggs on land and crossroads, where they get hit by vehicles. A snapping turtle may travel a mile from the nearest water source to lay her eggs. Once she leaves, the eggs are vulnerable to predation.

“In Cook County, we’ve identified one of the problems for turtles is that the river edges are overrun with invasive plant species,” says Margaret Frisbie, executive director of Friends of the Chicago River. That makes it difficult for turtles to find good nesting places that have sandy soils and plenty of sunshine located above the floodplain.

“Turtles are now laying eggs on roadsides and in sunny trails,” Frisbie says. “That makes them easy prey to vehicles, including cars and bikes. Raccoons and coyotes have learned these spots are great for a quick meal, and sometimes every single egg gets eaten and none of them hatches.” She once watched a snapping turtle dig a hole and lay eggs right next to a parking lot and a busy bike trail at Harm’s Woods, in Glenview.

In 2015, Friends of the Chicago River and the Forest Preserve District of Cook County began restoring hundreds of acres of turtle habitat at the North Branch of the Chicago River, as well as at Skokie Lagoons, near Glencoe and Winnetka, and along Thorn Creek, in the south suburbs. “We identified five locations along the river system and we cleared hundreds of acres, taking out invasive plants and working with forest preserve staff,” Frisbie says. 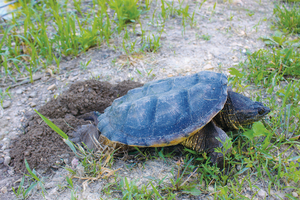 After the restoration, biologists captured about 50 turtles of four different species and attached GPS monitors to see where they would lay their eggs. “They started using the acres we cleared almost immediately,” Frisbie says. “It’s just extraordinary. It shows you how badly they needed places to nest.”

Biologists determined that roughly 60 percent of the nests in the restored sites were successful. “That means the eggs hatched and the baby turtles made it to the river,” Frisbie explains. Once the young reach a certain size, they are much less vulnerable to predation, according to biologists. “We are helping increase the turtle population and simultaneously, by opening up these invasive plant-ridden forests, we’re also increasing the health of the river ecosystem,” Frisbie says.

The state-endangered Blanding’s turtle is getting help, too, with several different programs. One is run by the Forest Preserve District of DuPage County, the Shedd Aquarium and the Peggy Notebaert Nature Museum, in Chicago, among other partners. The DuPage County district started the region’s first Blanding’s turtle recovery project in the region in 1996.

Gravid females—those with eggs—are collected by ecologists and induced to lay eggs, which are then incubated indoors and hatch. “We take care of them as they grow,” says Lailanya Goldsberry, former manager of living collections at the Notebaert Nature Museum. “They can grow without being predated and then they get released. It gives them a little head start,” she explains.

The Lake County Forest Preserve District has been working in Lake County on a similar Blanding’s turtle head start program since 2010. Glowacki says the species is endangered primarily because of loss of habitat, which includes a connection of both shallow marshes and prairies. The females often travel several miles to lay their eggs, leaving them vulnerable. A Blanding’s turtle doesn’t reproduce until it’s about 15 years old; painted turtles require about five years and can even produce two clutches a year.

Since the forest preserve district staff and interns began working with the Blanding’s turtles 12 years ago, the population in the wild has tripled, according to Glowacki. “At our core conservation site where we release the hatchlings, we’re now finding a good mix of juveniles and adults,” he observes. “We’re also starting to see a few of our head starts reach reproduction maturity.”

The biologists observe turtle nests in the middle of the night, and a recent discovery has left them feeling hopeful. Last year, they saw a turtle nesting and realized it was one of the first female releases. “It was an exciting find,” Glowacki says. “Her nest was successful.”

In May, the Lake County Forest Preserve District extended a 10-year agreement with the McHenry County Conservation District to continue its collaboration on the Blanding’s turtle head start project. Glowacki considers it an umbrella species. “By protecting Blanding’s turtles, you’re protecting another whole suite of species, because for Blanding’s to survive you need to conserve prairies, coastal marshes and other habitats,” he says.

One turtle that hadn’t been documented in Lake County since the early 1900s is the northern map turtle, which lives along the Des Plaines River. Dams have been removed along the river, and that’s given the turtles a way to expand into Lake County. “By removing the dams, we’ve seen more travel of turtle and fish species,” Glowacki says.

“Long-term persistence of turtles is really dependent on people and people’s habits,” Glowacki says. “If you can reduce their biggest threats—cars and raccoons—then you’re going a long way to help turtles. If you see a turtle on the road, slow down, don’t run over it. Just because you see them frequently doesn’t mean the population as a whole is doing well. To have turtles here 100 years from now, it will take people caring for them and being conscious of the hazards they encounter.”

Sheryl DeVore has written six books on science, health and nature, as well as nature, health and environment stories for national and regional publications. Read more at SherylDevore.Wordpress.com.

Enjoy Turtles in the Wild, Not as Pets

Federal law states, “Viable turtle eggs and live turtles with a carapace (shell) length of less than 4 inches shall not be sold, held for sale, or offered for any other type of commercial or public distribution.” That’s because small turtles can harbor salmonella, which can be transferred to humans that keep these reptiles as pets.

Turtles live to be many decades old and require special care and a lot of room to grow, according to the Humane Society of North America. “Countless pet turtles die from being kept in inadequate conditions. Turtles shipped by mail and other delivery services often die on the way,” according to Society’s website. Plus, people often grow tired of their pet turtles and put them in local lakes and ponds, which can introduce diseases to native turtles, according to the Invasive Species Initiative. Turtles have lived on Earth since the dinosaur era, some 60 million years ago. But today, these reptiles with hard shells and soft bodies need help, and they are getting it from groups throughout the Chicago region. Writer Sheryl DeVore talks with Chicago area experts about urban and suburban turtle conservation efforts in natural Illinois areas. Read More » May is peak time for birdwatchers and nature lovers to hear and see about 30 species of warblers as they migrate through the Chicago region. Birdwatching is a fun, eco-friendly way to enjoy nature and get outside while staying at home. Read More » One Earth Film Festival Promotes the Power of We

The ninth annual One Earth Film Festival will be held March 6 through 15 at more than 40 locations in Chicago and throughout Cook, DuPage and Lake counties with the theme of The Power of We to address the climate crisis. Read More »