Sometimes it’s just too cold to spend a lot of time outdoors exploring nature in winter. Local centers offer free indoor nature experiences for visitors that include holding a snake, studying animal tracks, watching birds at feeders or peering at bees in a hive. The centers, typically run by forest preserve and park districts, also have short trails nearby for a brisk walk.

The Grove Interpretive Center, in Glenview, hosts a live, 125-year-old alligator turtle indoors year-round. “We have 10 kinds of turtles, but the alligator turtle is one of the highlights of the center. People don’t get to see a turtle like that up close,” says Lorin Ottlinger, director of the 150-acre preserve, which is designated as a National Historic Landmark.

The interpretive center is one of several buildings on the property that pay homage to visionary horticulturist and educator John Kennicott, who settled on the property in 1836 and raised a son, Robert Kennicott. Robert kept part of his plant and animal specimen collection at The Grove, became a prominent naturalist, founded the Chicago Academy of Sciences and worked at the Smithsonian Institution.

The center was renovated after voters approved a Glenview Park District bond measure with $2.6 million earmarked for The Grove. More exhibits show live and taxidermy animals that Kennicott studied at home and on his travels to southern Illinois and Alaska. 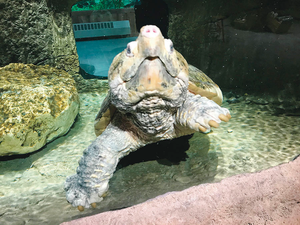 The alligator turtle that Kennicott likely saw when visiting southern Illinois, now has a bigger tank with more nooks and crannies. “Kids can crawl in a tunnel around a new turtle island to look at the turtles through windows,” says Ottlinger. Adults also have a new pathway to view the turtles.

A 10-foot-tall Alaskan brown bear that once stood out of view on the second floor now greets visitors at the entrance. Kennicott observed bears and other wildlife while in Alaska. Another new display features a giant ground sloth skeleton. The sloth is an extinct relative of the South American tree sloth. “Visitors learn that giant ground sloths were native to the Midwest, including Illinois, until the departure of the last Ice Age,” Ottlinger notes. There’s also a new, 1,600-gallon aquarium filled with native Illinois fish. 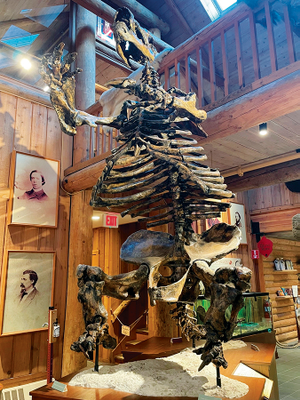 A skeleton of a giant sloth at The Grove Interpretive Center, in Glenview. Photo courtesy Glenview Park District

“Visiting places like The Grove Interpretive Center help foster a child’s natural sense of wonder,” Ottlinger says. “Their experiences here help to grow a passion for the environment and for plants and animals and biodiversity that will help them be responsible adults and help protect these treasures.”

Adults also come away changed, she says. “For example, some people who come here hate snakes, but by the time they leave, they understand why they’re important and why they’re living here,” Ottlinger explains. “There are so many studies that show how important nature is. It’s so good for your well-being,” she advises, adding that indoor centers bring a healthy dose of nature to humans in winter.

“One of the things I really love to talk about with kids is how Robert Kennicott was a little boy who was exploring nature in Glenview, just like they are. He grew up to a famous explorer and famous scientist.” It inspires children to consider what they might accomplish.

The center offers interactive exhibits, including a dog sled Kennicott would have used on his trips to Alaska. Children can learn ways to stack the sled with items needed on such a trip.

The Grove Interpretive Center, at 1421 Milwaukee Avenue, is open from 8 a.m. to 4 p.m. weekdays and 8 a.m. to 5 p.m. weekends. Visit GlenviewParks.org/facilities/the-grove.

At the Isle a la Cache Museum, in Romeoville, children interact with animal pelts and tracks, says Lynn Kurczewksi, director of visitor services for the Forest Preserve District of Will County, which owns the museum. “We want kids to experience the exhibits through hands-on learning.”

She says, “At the museum, you can learn about how Native Americans lived in this area. One Sunday a month, we open a replica fur trader’s cabin to demonstrate life in the late 1700s. Interpretive naturalists and volunteers dressed in period clothing are there to provide information.” 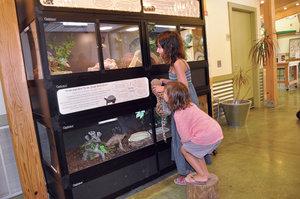 Kurczewksi explains, “Though the primary focus of the museum is the French fur trade, the forest preserve district has added more nature-related exhibits, including a large tank with state-endangered Blanding’s turtles, plus families can take a half-mile hike around the island to see the river and maybe even some beaver activity.” Visit ReconnectWithNature.org/Preserves-Trails/Visitor-Centers/Isle-a-la-Cache-Museum.aspx.

Another Will County forest preserve nature center adults and children enjoy in winter is Plum Creek Nature Center, near the town of Beecher. 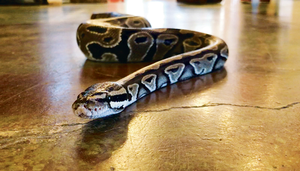 The nature center features three live animals: Penny, a ball python, Lilo, an eastern box turtle, and Bluey, a blue-tongued skink. They are all rescue animals. “The five-foot-long python attracts the attention of both adults and children,” Kurczewski says. “Our naturalist staff will on occasion take the animals out and talk to visitors about them.”

As with The Grove interpretive centers, naturalists at Plum Creek help people get over their fear of snakes. “They learn how docile they are,” Kurczewski says.

“We also have an indoor live bee exhibit where you can see the activity inside the hive. The bees aren’t going outside in the winter, but they are buzzing around inside the hive. They’re doing cleaning and maintenance.” The bees in the hive help make the honey sold in the gift shop.

A winter favorite is a room with a fireplace where visitors can watch birds at outdoor feeders. “That’s really what people are drawn to,” Kurczewski says. “They’ll sit there for hours to watch the birds.” They also can listen to the birds from inside through a microphone system that captures the chatters and calls from outside.

Roughly 15 to 20 feeders, including those with suet, thistle and sunflower seeds, attract a variety of birds, including woodpeckers. “Last year, we saw a red-headed woodpecker at the feeder, which was really unusual,” Kurczewski recalls. Other birds that visit the feeders in winter include tufted titmice, black-capped chickadees, white-breasted nuthatches, northern cardinals and blue jays.

“People can talk with the staff and learn about the types of seeds we offer and what kinds of bird feeders they can have in their own yards,” Kurczewski shares. To get a breath of fresh air and some exercise, visitors can walk a paved, half-mile trail that leads to an observation deck along Snapper Pond Trail. A longer hike takes visitors to an elevated wooden bridge where they can see ravines below. “It’s really pretty. It’s such a peaceful landscape,” she says.

“You can spend a good afternoon here, enjoying all the exhibits, watching the birds or shopping the gift shop. We also sell coffee or hot cocoa and have free Wi-Fi,” she notes. Visitors also can register for free winter programs and spend all day communing with nature at the center.

Both the museum and center are open in winter from 10 a.m. to 4 p.m., Tuesday through Saturday, and noon to 4 p.m., Sundays. Visit ReconnectWithNature.org/preserves-trails/visitor-centers/plum-creek-nature-center.

Little Red Schoolhouse Nature Center, 9800 Willow Springs Road, Willow Spring. The center opened in 1955, and a new one was constructed in 2010. It features live animals, exhibits and a wigwam replica. It’s open 9 a.m. to 4 p.m. through February, and closed on Fridays. In March, it remains open until 5 p.m. fpdcc.com/places/locations/little-red-schoolhouse-nature-center.

Prairie Grass Nature Museum, 960 Hart Road, Round Lake, has lifelike indoor displays designed to give visitors an experience of being outdoors. Exhibits include blooming prairie flowers, wetland birds and mammal of the woodlands. Live animals also can be viewed. Hours vary.
Check rlapd.org/prairie-grass-nature-museum.