Beginning in June, public and private rose gardens add beauty to the region with varied hues, shapes and fragrances. Humans created those roses through hybridization and cultivation. Nature also has created roses that bloom in the region. They’re called species roses and, according to the Chicago Botanic Garden, “They’re hardy, indestructible, disease-resistant (and) carefree.” The species roses typically have five petals and produce large rose hips in the fall that wild animals eat.

“A species rose is one that exists naturally in nature. It’s there all on its own, through evolution,” says Rory Klick, a retired horticulture and plant ecology professor at the College of Lake County, in Grayslake.

“The non-species roses, the hybrids and cultivars, are not as easy to care for,” she adds. “They’re persnickety about fertility and moisture requirements, and they can be disease-prone. They’re higher maintenance and they don’t always attract the pollinators like species roses do.” Species roses also have thorns like cultivated roses.

More than 150 species of roses exist in the world, some in North America, others in Asia, Europe and Africa. Fossils show wild roses grew at least 35 million years ago, according to the University of Illinois Extension Service. Wild roses have been hybridized and cultivated since Roman times to produce the familiar roses bought at garden shops called hybrid teas, floribunda and grandiflora. The human-made roses were cultivated to bloom longer, produce more petals and come in many colors. More than 20,000 hybrids of wild roses have been developed, with hundreds of new ones each year, according to AmericanMeadows.com.

Klick enjoys all kinds of roses, but prefers planting species roses in her garden. “Some of the recent hybrid roses are more disease-resistant,” she admits, “but with those roses, you’re still losing a lot of the pollinator value. And one of the beautiful things about species roses is they produce those hips late in the season in fall.”

Species roses develop rose hips in the fall that provide food for animals as well as a source of tea high in Vitamin C for humans. Photo courtesy of Wikipedia Commons.

When the petals open, pollinators enter the center part of the flower to seek and transfer pollen. “That forms the rose hip, which is a little red or blue fruit,” Klick explains. “I harvest those hips and steep them as tea. Nature knows the timing of things; when the rose hips are around, you can snip them off, muddle them in the bottom of your cup and steep in hot water, and it gives this rosy pink, citrusy tea. It’s also very high in vitamin C.”

It’s best to stick to the Latin names, Nyboer says, because there are so many different common names for the species. For example, Rosa setigera is sometimes called wild climbing rose or Illinois rose. Rosa blanda has been called early wild rose, and the name pasture rose has been used for several of these species.

Rosa blanda, early wild rose or smooth wild rose, grows in sunny, somewhat moist spots. It’s one of few rose species that are nearly thornless. Rosa palustris, or swamp rose, grows in marshes in northern Illinois, as well as in bald cypress swamps in southern Illinois. Rosa carolina, or Carolina rose, grows throughout the state in dry to moist prairies, fields and dry woods. Rosa setigera, or pasture rose, grows larger than Carolina rose and is related to wild raspberries and blackberries. “It has arching, trailing canes or branches,” Klick says. This species tolerates the hot, dry weather.

“These species can be difficult to separate in the wild,” Nyboer says. The Field Museum has a link with some explanations and photos. One species rose Klick has planted which is native to China is Rosa rugosa, sometimes called beach rose because it thrives along coastlines and in sandy, dry conditions. “I love the flowers,” she says. “They are pure, clear and deep pink, with bright yellow stamens. You can see bees all over them in the summer.” 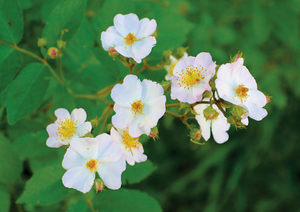 The non-native multiflora rose was introduced to Illinois in the 1950s and has become invasive. Photo by Steven D. Bailey

Klick says although some non-native plants are invasive, Rosa rugosa is not, at least in Illinois. Unfortunately, humans have introduced a species rose, Rosa multiflora, the multiflora rose, from China that is invasive to Illinois. It blooms the same time as the species roses, but has many more clusters of smaller, white flowers which occasionally take on a pink tinge.

The multiflora rose was introduced to Illinois in the 1950s. Nurseries sold the plants in groups for gardeners to create what they called a “living fence”. The horticultural industry also used it in rose breeding programs. Biologists at the time thought it would be a great plant for food and shelter. Today, it has become a serious invader, not only in natural areas, but also agricultural lands. It’s considered an exotic weed under the Illinois Exotic Weed Control Act of 1987. Selling or planting this species in Illinois is prohibited.

“Rosa multiflora is highly invasive,” Klick says. “We have to be educated consumers. We wouldn’t want to put multiflora rose in our gardens.” Researchers have found that multiflora rose negatively affects breeding birds of special concern, including Bell’s vireo and yellow breasted chat.

Land managers try to keep Rosa multifora at bay, but it can easily be found in local natural areas and forest preserves, The native species rose can also be seen in June and July. Both Rosa setigera and Rosa multifora grow at Moraine Hills State Park, in McHenry County, giving the opportunity to see the difference. Rosa Carolina and Rosa multiflora also grow within Lakewood Forest Preserve, in Lake County.

Klick says it’s not easy to find the native species roses for planting in gardens. “Check local native plant sales,” she suggests. “Some of them sell our native species roses.” In addition, species roses can be ordered online through sources such as Possibility Place, in Will County; Midwest Groundcovers, in Kane County or Prairie Moon Nursery, in Minnesota. Klick adds, “Speak with your pocketbook. Ask local nurseries to sell native roses and plants.” May is peak time for birdwatchers and nature lovers to hear and see about 30 species of warblers as they migrate through the Chicago region. Birdwatching is a fun, eco-friendly way to enjoy nature and get outside while staying at home. Read More »
In-Print, Green Living Gardens June 2022 Roses