Senior wildlife biologist Chris Anchor has been studying rookeries—places where egrets, herons and cormorants nest communally—for decades. Like no other species in the region, these birds offer humans a chance to watch them court, build nests and raise young. “There’s so much interesting bird behavior to see from spring through summer at a rookery,” says Anchor, who works for the Forest Preserve District of Cook County.

Sometime in March or early April, herons, egrets and cormorants arrive at the rookery and begin carrying long twigs to build or tidy old nests in trees. “There, you’ll hear a lot of noise and competition and see males displaying for the females,” Anchor says. “They lift their wings and show off their plumage. It’s gorgeous.”

As the season progresses, the eggs hatch and the young demand food and constant attention from their busy parents that fly for miles to bring them regurgitated fish and other aquatic delights. Herons and egrets wade in shallow water to find fish and frogs, while cormorants swim and dive for fish.

Several large rookeries exist for the public to visit in the Chicago region, including Baker’s Lake, in Barrington, and Lake Renwick, in Plainfield. Types of species have changed over the years at these rookeries, and numbers of nests have risen and declined for various reasons. Many smaller rookeries can also be found throughout the Chicago region; some can be seen while driving, while others are nestled in hidden places.

Herons, egrets and cormorants nest in colonies from several to thousands of nests. They feel protected from predators when they’re in large numbers. “It’s like a big school of fish in the ocean,” Anchor explains, noting, “Herons and egrets are near the top of the food chain, so when you have a rookery, that indicates your environment is in good shape.”

Five types of herons and egrets, plus one cormorant species, have nested in small to large rookeries in Cook County. The fairly common, but secretive green heron and the rare yellow-crowned night-heron nest in small, loose colonies, and are not easy to find. “Plus, they can appear one year and be gone the next,” Anchor says. “At one time, eight, yellow-crowned night-heron nests were found at Busse Woods, in Rolling Meadows. Then they left. Another time, they showed up in a neighborhood in someone’s blue spruce. We’ve seen that in South Holland, Barrington Hills and Glencoe.” 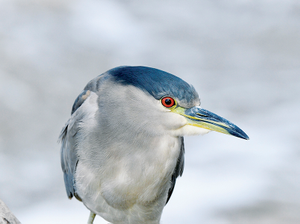 Colonial nesters that breed together in rookeries include the state-endangered black-crowned night-heron, great egret, great blue heron and double-crested cormorant. Once endangered in the state, cormorants have overtaken some of the rookeries, kicking out the smaller night-herons and sometimes even the larger blue herons. “At one point, Baker’s Lake had the largest black-crowned night-heron rookery in the state,” Anchor relates. “Now, we maybe see one or two nests.”

Black-crowned night-herons have recently established a rookery at Chicago’s Lincoln Park Zoo  in a place that’s not suitable for the cormorants or larger great blue herons. To protect this endangered species, officials temporarily close the children’s zoo during the night-heron nesting season to give the birds privacy. Colonial nesters might feel safe from predators, but they prefer to be away from humans, according to Anchor.

The Baker’s Lake rookery has changed dramatically over the years. It started with the black-crowned night-herons in the 1980s. That attracted the great blue herons, which took the highest place in the rookery, leaving the night-herons to lower quarters where they can more easily be preyed upon. Great egrets, once state-endangered, nest there, too.

Rookeries don’t last forever. They can collapse for many reasons, and when they do, birds have to find another suitable spot to nest in a colony. At Baker’s Lake, as at other rookeries, concentrated bird droppings add nitrogen and phosphate to the environment, killing the vegetation, including the trees in which the birds are nesting. To keep the rookery going, forest preserve staff erected manmade nesting structures with platforms for them. “The birds readily accepted the structures,” Anchor says. “But because the cormorants are now dominating, the staff has removed the platforms. We know the cormorants and egrets will continue to nest on the ground, but at some point we’re hoping the process will allow itself to rehabilitate. We’re hoping the native vegetation will get growing again and another rookery will begin.” 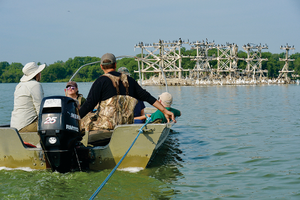 Baker’s Lake, however, serves as an excellent study site. “Every spring, we go out with Brookfield Zoo staff and band a couple hundred birds,” Anchor says. “We take blood samples. We monitor for heavy metals and pesticides. We’ve been doing this for decades.” For the most part, the levels have been within normal standards. These herons and egrets serve as environmental
sentinels. Metals and pesticides accumulate in the fish the birds eat and then get transferred to the herons, egrets and cormorants. “By taking their blood samples, you can detect issues that could affect humans,” Anchor says.

Rookeries that are not on an island surrounded by water, like Baker’s Lake, leave the birds open to predation by raccoons. So a rookery may be established for a few years and then the raccoons find them, and birds need to look for another place to nest. “The whole system of rookeries is complex,” Anchor says. 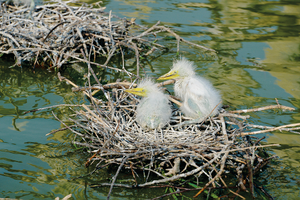 Great egret young wait for food from their parents at Baker’s Lakerookery, in Barrington. Photo by Jeff Nelson

David Robson, a biologist for the Forest Preserve District of Will County, agrees. He has been observing the changes at a long-lived rookery at Lake Renwick Forest Preserve for 35 years. Birds started a rookery there when it was an old quarry in the 1960s. In the mid-1980s, five bird species nested in the rookery. These were the great blue herons, great egrets, double-crested cormorants, black-crowned night-herons and even some cattle egrets at that time, though they no longer breed at Lake Renwick.

As with the Baker’s Lake rookery, the trees began dying, so staff erected artificial structures to keep the birds breeding there. “There were all kinds of vegetated islands nearby which they’ve never attempted to nest on,” Robson says. “So we said let’s try to keep them here.”

Robson says, “The number of good nesting locations is shrinking for these birds. We don’t know exactly what makes them choose a particular nesting site or how close it needs to be to where they forage for food. “It’s the same old story,” he  continues. “Every time someone talks about a form of wildlife in peril, it’s almost inevitably due to habitat loss and degradation.”

The hope is that enough natural habitat exists in the region so the herons and egrets have plenty of places to choose from. “And we need to hope that development and congestion in that part of Will County won’t get to be too much for them,” Robson says. After the breeding season, herons, egrets and cormorants disperse and can be found in the region foraging in lakes, ponds and rivers until they head south for the winter. 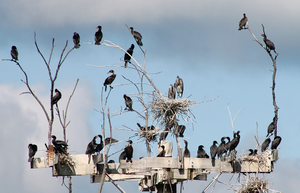 Where to View Rookeries

The Forest Preserve District of Will County closes the Lake Renwick Nature Preserve rookery, in Plainfield, during the nesting season, but schedules times for public to take a guided walk to watch the birds. Visit ReconnectWithNature.org/Preserves-Trails/Visitor-Centers/Lake-Renwick-Heron-Rookery-Visitor-Center. Sometimes it’s just too cold to spend a lot of time outdoors exploring nature in winter. Local centers offer free indoor nature experiences for visitors that include holding a snake, studying animal tracks, watching birds at feeders or peering at bees in a hive. Read More » The Recycle Your Bicycle program serves a need not only for individuals that have unused bikes gathering dust, but also for police departments and other agencies that find themselves with too many bikes to store. Read More » May is peak time for birdwatchers and nature lovers to hear and see about 30 species of warblers as they migrate through the Chicago region. Birdwatching is a fun, eco-friendly way to enjoy nature and get outside while staying at home. Read More »
In-Print, Green Living Nature Birds May 2022